Advocating with and on behalf of our community

SAGE stands proudly with the LGBTQ+ pioneers across the country who’ve been fighting for decades for their right to live with dignity and respect.

We are excited to work with the current administration and key staff in Washington, D.C., Los Angeles, Chicago, and San Francisco, plus our nationwide network of affiliates, to advocate for LGBTQ+ older people at the federal, state, and local levels. We:

Raise your voice and advocate with us.

Support LGBTQ+ Elders TODAY:
We enjoy the rights and protections we have today because our community pioneers refused to be invisible by raising their voices, taking to the streets, and demanding equality. Yet today, LGBTQ+ people in 28 states still lack legal protections against discrimination in housing, healthcare, and employment. Don’t just tell LGBTQ+ elders that you want equality – show them that we’re still willing to raise our voices and fight for what’s right by calling your senators and telling them that you support the Equality Act.

Additionally, our partnerships with groups such as the National Academy on an Aging Society, the Movement Advancement Project, the Center for American Progress, the National Center for Transgender Equality, the International Federation for Ageing, and the Williams Institute, among others, have helped us produce critical policy reports and conferences on LGBTQ+ aging issues.

We all have the opportunity to impact the lives of LGBTQ+ elders.

MEMBERS OF CONGRESS AND THEIR STAFFS

PEOPLE MOBILIZED ACROSS THE U.S.

Tell your representative to protect the rights of LGBTQ+ elders.

Advocate with us where you live

Learn what SAGE is doing to fight for equality in your community and how you can get involved.

Our message of treating LGBTQ+ elders with the dignity and respect they deserve is amplified and strengthened by our partnerships and coalitions. 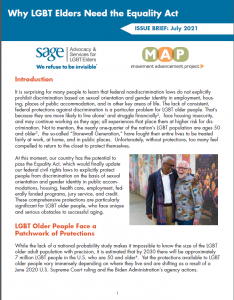 LGBTQ+ and HIV Aging Policy Recomendations for a New Administration 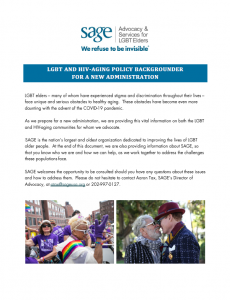 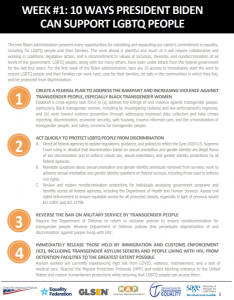 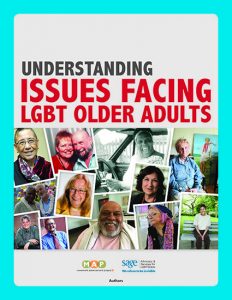