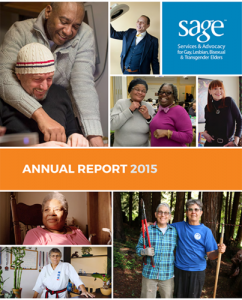 2015 was a remarkable year for SAGE and LGBT older people because it presented unique opportunities to advance our agenda—and we seized every last one of them. Indeed, over the past twelve months we have repeatedly demonstrated the remarkable difference we can make for older members of our community when we work together and energetically deploy the full range of tools at our disposal.

A few things made 2015 very special. In June, the Supreme Court decreed that marriage equality for LGBT people was a constitutional right. Then in July, there was the White House Conference on Aging, which takes place once a decade. Ten years ago at the 2005 White House Conference, SAGE made history by becoming the first and only official LGBT delegate to the Conference.

Last year, we took it to a whole new level by blanketing the Conference with the testimony of hundreds of LGBT elders from across the country and forging an overwhelming presence at the big event. Our efforts paid off big time, with the announcement by the U.S. Administration on Aging of an important new commitment to make its work more LGBT-inclusive.

SAGE also flexed our policy advocacy muscle in 2015, convincing the U.S. Department for Housing & Urban Development (HUD) to issue a bold new directive to federally supported senior housing providers across the country to eliminate discrimination against LGBT older people. Of course, putting the right rules in place is only half the battle—bringing those rules to life is where the rubber hits the road. That’s why the powerful advances SAGE engineered last year in its LGBT cultural competency training for aging service providers is so important.

Much of the important progress we made last year was thanks to SAGE’s relentless commitment to collaborate with key partners who can make an important difference for LGBT elders. Of the many partners we worked with in 2015, AARP stands out thanks to a successful pilot program joining SAGE affiliates and AARP local offices in key states across the country. The results far exceeded our expectations, including when we convinced AARP to issue a powerful public statement in support of Houston’s HERO ordinance and in opposition to transphobic fear-mongering. Expect more to come as we keep building on this exciting foundation.

And finally, 2015 was a breakthrough year in SAGE’s efforts to leverage our headquarters and long history in New York City to forge uniquely ambitious LGBT elder services that can inspire similar progress across the nation. SAGE took a huge step in that direction last year when we expanded out of the Chelsea neighborhood to establish full-fledged LGBT senior centers in four new locations, including three of the Big Apple’s most prominent people of color neighborhoods.

There is much more we could talk about, given all of the exciting progress we packed into 2015. Since we can’t cover everything, I hope this annual report shares enough of our highlights so it’s clear why your support for SAGE’s work is so important and why we should be so proud of what we are accomplishing—together—to ensure that every LGBT older person can age with dignity, support and boundless opportunity.