SAGE Alaska Has Made Its Mark on the LGBT Movement

Over the past year, Alaska has emerged as a leader in the national fight against concerted, continuous attacks on the LGBT community, particularly those who are transgender. 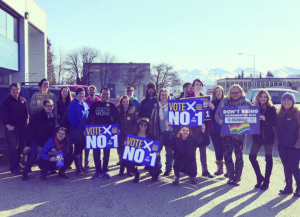 In April, Anchorage became the first city in the nation to defeat an anti-transgender proposition that would have made it illegal for transgender people to use the locker room and bathroom that match their gender identity. SAGE Alaska was a part of the driving force behind the defeat of the proposition, and worked collectively with like-minded groups in the Fair Anchorage coalition. The coalition included the ACLU, Alaskans Together for Equality, Christians for Equality, Freedom for All Americans, HRC, Identity (which includes SAGE Alaska), the Pride Foundation, and Planned Parenthood.

SAGE Alaska is a program within Identity, a statewide organization that provides support to LGBT older people. The need for a SAGE chapter in Alaska, which formed in 2016, was critical: In that state, the number of people 60 to 65 has increased 107 percent in the last 10 years. Alaska has the highest health care costs in the U.S., the highest long-term care costs, and a scarcity of affordable housing.

SAGE Alaska co-founder Julie Schmidt says that the organization is focusing on how to overcome the challenges of a sparse landscape that exacerbates LGBT isolation.

“We only have three city hubs and a little over 280,000 people in Anchorage, with only 800,000 people in the whole state. Many LGBT people live in the villages, which is a whole other culture. They don’t want to be identified and out.”

A statewide survey on the needs of LGBT elders in Alaska revealed three major needs of the LGBT aging community: access to LGBT resources and information; knowledge about activities and events; a variety of places to connect; and assurance about personal safety after being outed when they participate in LGBT events and services.

“Besides Identity, there really aren’t that many LGBT aging resources in Alaska,” says Schmidt. “People are becoming more and more receptive to the LGBT community, but many people still don’t realize that LGBT elders have special needs and circumstances.”

Schmidt says the chapter has already begun to dig in to these issues and identify strategies to help the LGBT aging community in the long-term. 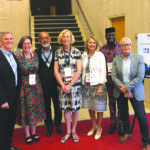 The Untold Experiences of LGBT Elders Around the WorldArticles 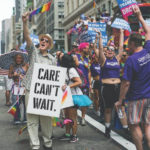