Marsha Wetzel, an out lesbian, shared her life with her partner of 30 years, Judith Kahn, at the couple’s home in Illinois until Kahn died in 2013 of colon cancer.

As is the case with some same-sex couples who never married, Kahn’s family took legal possession of the couple’s home several years later, forcing Wetzel, who suffered from severe arthritis, to move into the Glen St. Andrew Living Community, a retirement and assisted living facility in Niles, Ill.

According to a lawsuit filed on her behalf in 2016 by the LGBTQ litigation group Lambda Legal, when word got out that Wetzel was a lesbian after she disclosed her sexual orientation to a fellow resident, she was called homophobic slurs, spat on, and assaulted on several occasions by other residents of the facility. The lawsuit, which later resulted in a court ruling in Wetzel’s favor, charged that officials at the Glen St. Andrew facility illegally failed to take action to prevent Wetzel from being subjected to abuse and threats by fellow residents and retaliated against her when she complained.

Lambda Legal announced one year ago, on Nov. 20, 2020, that Wetzel passed away at the age of 73 of natural causes after a landmark 2018 appeals court ruling in her favor affirmed that residential facilities such as the one in which she lived are legally responsible for the safety of tenant residents.

“Marsha spent the rest of her days in a senior living community where she was out and affirmed,” said Lambda Legal attorney Karen Loewy, who represented Wetzel in the lawsuit.

Advocates for LGBTQ seniors were hopeful that the 2018 U.S. Court of Appeals for the Seventh Circuit ruling in the Wetzel case would speed up the gradual but steady advances in the rights of LGBTQ elders in long-term care facilities and in society in general.

A short time later, the New York City-based national LGBTQ elder advocacy group SAGE expanded its programs providing cultural competency training for the nation’s long-term care residential facilities. And in some cities, including New York, Los Angeles, and San Francisco, LGBTQ specific retirement and long-term care facilities began to open to provide LGBTQ elders with a wide range of “wrap around” services in addition to a safe place to live.

But LGBTQ elder advocates were taken aback in October of this year when news surfaced that transgender U.S. Army veteran Lisa Oakley, 68, was denied placement in more than two-dozen long-term care facilities in Colorado in 2020 and earlier this year.

“When they found out I was transgender, a lot of the facilities didn’t want me,” Oakley told USA Today. “A lot of transgender people, I’m sure, face the same thing,” she said. “We’re humans, just like everybody else.”

Oakley told other media outlets her ordeal in trying to gain admission to a residential care facility began in October 2020, when she became unable to care for herself due to complications from diabetes. Her first choice was a facility in her hometown in rural Craig, Colo., where she had lived for the previous 25 years. She believes that facility turned her down because of her gender identity.

A social worker who assisted in Oakley’s applications for long-term care facilities said the facility in Craig said Oakley would have to be placed in a private room, which was at the time unavailable, “because she still has her ‘boy parts’ and cannot be placed with a woman” in a shared room.

Many other Colorado facilities to which Oakley applied for admission, according to social worker Cori Martin-Crawford, cited the COVID pandemic as the reason for not accepting new residents. But as COVID related restrictions began to subside, other facilities continued to deny Oakley admission.

With Martin-Crawford’s help, Oakley finally found a facility that is LGBTQ supportive in Grand Junction, Colo., which is nearly three hours away from her hometown of Craig, where she had hoped to remain.

LGBTQ activists expressed concern that the discrimination that Oakley faced took place in the state of Colorado, which has a state law that bans discrimination based on sexual orientation and gender identity. Experts familiar with long-term care facilities for older adults have said many private elder care facilities can get around state LGBTQ nondiscrimination laws by claiming other reasons for turning down an LGBTQ person.

Michael Adams, the CEO of SAGE, told the Blade that the wide range of programs and initiatives put in place by SAGE and other groups advocating for LGBTQ elders in recent years have resulted in significant changes in support of LGBTQ seniors.

Adams was referring to the SAGE program started recently called SAGECare that arranges for employees and other officials at elder care facilities throughout the country to receive LGBTQ competency training. The facilities that participate in the program are designated “SAGECare credentialed,” and are included in SAGE database lists available to LGBTQ elders looking for a safe facility in which to reside.

SAGE spokesperson Christina Da Costa provided the Blade with data showing there have been 136,975 professionals trained at a total of 617 SAGECare credentialed organizations nationwide. Out of 617 organizations, 172 are residential communities. Also, out of the total of 617 are 167 Area Agencies on Aging, Aging and Disability Resource Centers, Senior Centers, and senior Ombudsman offices.

Da Costa said 278 of the credentialed entities that have received the SAGECare training throughout the country are “other aging focused nonprofit and for-profit businesses.”

According to SAGE, there are 12 SAGECare credentialed elder care facilities or service providers operating in the D.C. metropolitan area, with two located in D.C. One of the D.C. facilities is Ingleside at Rock Creek, located in Northwest D.C., which is a residential facility. The other is Options for Senior America, a company that provides in-home care services for seniors, including seniors living in D.C.

A SAGE list of the D.C.-area SAGECare credentialed facilities shows that three are in Rockville, Md.; two are in Gaithersburg, Md.; and one each are in Bethesda, Md.; Arlington, Va.; and Alexandria, Va. The list shows that one of them that provides services to elders in the D.C. area is based in North Carolina.

SAGE has a separate list of the 15 elder care residential facilities in the U.S. created specifically to serve LGBTQ residents.

None are in D.C., Maryland, or Virginia. However, SAGE says it has been working in cooperation with Mary’s House for Older Adults, a D.C.-based LGBTQ organization that advocates for LGBTQ seniors and is in the process of opening LGBTQ elder residential facilities in D.C. and others in the surrounding suburbs.

While a residential LGBTQ elder facility has yet to open in the D.C. area, activists note that in addition to Mary’s House, services and amenities for LGBTQ elders in the area are currently being provided by the D.C. Center for the LGBTQ+ Community and Whitman-Walker Health, the LGBTQ supportive health center, which also has a legal services branch.

Adams said the LGBTQ elder residential facilities range in size, with the largest – New York’s Stonewall House – having 143 apartments that can accommodate 200 residents. He said others vary from 40 or 50 residential units to 120.

Advocates for LGBTQ elders point to what they consider another important breakthrough for LGBTQ elders this year in the release of a joint SAGE-Human Rights Campaign Long-Term Care Equality Index report for 2021. Adams said the report is the first of what could become an annual report and rating and scorecard for long-term care elder residential facilities and other elder facilities.

The 2021 report includes a self-reporting assessment of elder care facilities that the facilities themselves completed through a questionnaire in which many disclosed they have LGBTQ nondiscrimination policies for elders around admission to the facility and for practices by staff for those residing in their facilities.

The report includes a chart showing that 158 elder care facilities in 31 states responded positively to the outreach to them by organizers of the Long-Term Care Equality Index.

“We are thrilled to be working with SAGE and to be working with the Human Rights Campaign who are developing the Long-Term Care Equality Index,” said Nii-Quartelai Quartey, who serves as senior adviser and LGBTQ liaison for the American Association of Retired Persons or AARP.

“There is a great deal of work that we’re doing in the area of LGBTQ older adults nationwide,” Quartey told the Blade. “And AARP has been engaged with the LGBTQ community nationwide for many years now,” he said.

“In recent years, we’ve turned up the volume in working more closely with organizations like SAGE and Lambda Legal and the Victory Fund Institute, the Center for Black Equity, the National Queer Asian Pacific Islander Alliance, and the Hispanic Federation.”

According to Quartey, a recent AARP study of LGBTQ elders called Maintaining Dignity shows that longstanding concerns of discrimination remain despite the many advances in support for LGBTQ seniors in recent years.

Another recent survey of LGBTQ elders conducted by SAGE asking them how they feel about the use of the word “queer” in descriptions of LGBTQ people yielded findings that came as a surprise to some, according to Adams. A large majority of those surveyed from across the country said they are “comfortable at this point using that word and reclaiming that word, which is different from what we had heard historically,” Adams said.

He said in response to those findings SAGE will now as an organization gradually shift to using the term LGBTQ instead of its past practice of using LGBTQ+.

Although Congress has yet to pass the Equality Act, last year under the Trump Administration, Congress acted in a rare bipartisan way to approve the required five-year reauthorization of the U.S. Older Americans Act with new language supportive of LGBTQ older adults. President Trump signed the legislation.

The language includes a mandate for outreach to and reporting about services provided to LGBTQ older adults in federally funded programs. It also opens the way for LGBTQ older adults to be designated in a category of “greatest social need.” Under that category, older adults receive a higher priority in the allocation of resources by the federal government.

“We’ve come a long way, but we still have a way to go to get over the finish line,” said the AARP’s Quartey. “And aside from passing legislation federally and on the state and local level, we absolutely need to continue the hard work of changing hearts and minds,” he said.

Longtime gay activist and writer Brian McNaught, whose latest book, “On Being Gay and Gray – Our Stories, Gifts, and the Meaning of Our Lives,” was just released, says his own very informal survey of LGBTQ elders found there is a need for intimacy that may be too controversial for the establishment LGBTQ elder groups.

“I’m a SAGE volunteer and the 81-year-old man with whom I was working after his husband of 47 years died, said after his grieving process, ‘I want to be hugged and kissed. Does that make me a bad person?’”

McNaught told the Blade he assured the man those feelings do not make him a bad person. McNaught said the man’s comment prompted him to conduct further research, in which he found that some gay male elders in the Fort Lauderdale, Fla., area who often need assisted living support would like to patronize gay bathhouses or seek the services of an escort agency. He said he determined that any LGBTQ elder group providing such services would trigger “a huge uproar of protests” and most likely a loss of funding.

“We don’t want to talk about sexuality and aging,” McNaught said.

This article was originally published in Washington Blade on November 18, 2021. 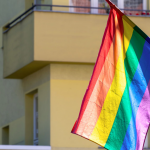 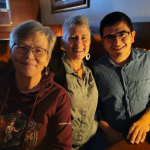