In: Cultural Competency, Discrimination, In the News, LGBT Aging

In mid-January 2021, Sue Van Zante-Peiser received a call from her friend Ed’s partner. Ed had been hospitalized and the hospital was trying to organize care, but it was tough. Ed’s partner is a decade older and faced his own health issues and Ed’s sister lived out of state. Van Zante-Peiser offered to help.

“The hospital did not reach out to Ed’s partner and they literally said to me, ‘Well, they’re not a married couple,’ and I don’t even know how they could be saying that in 2021,” Van Zante-Peiser, 55, of Seattle, told TODAY. “The hospital let me call every day and find out if Ed had been eating or if he was able to walk and how he was feeling.”

Ed had dementia and when he felt confused and scared, the nurses called Van Zante-Peiser or his sister.

“One of us would say something loving to him for a minute, which usually would calm him down,” she said.

But figuring out where Ed should go was difficult. Ed couldn’t return home but there weren’t any beds for him in a skilled nursing facility. What’s more, Van Zante-Peiser worried about finding a place that respected Ed.

“I would do a lot of advocacy behind the scenes,” she said. “I talked to him every day … Usually our conversations were five minutes or less. He was very confused. He didn’t know where he was. He sometimes thought that he was in prison or he would joyfully think he was at a writer’s conference.”

As time went on the hospital relied on Van Zante-Peiser more.

“They were very happy to have me involved while I was helping to support them,” she said.

Van Zante-Peiser is one of the many people in the LGBTQ community that find themselves as caregivers to friends. Nearly 21% of LGBTQ people provide care to elderly friends compared to only 6% of non-LGBTQ adults because, in part, LGBTQ elders are four times less likely to have children, according to Sage, a nonprofit dedicated to advocacy and services for older LGBTQ people. This leads to tremendous problems.

“Older LGBTQ folks are among some of the most vulnerable elders in our country,” Michael Adams, CEO of Sage told TODAY. “We live in a country where 85% of caregiving comes from adult children and partners. So when you remove adult children from the mix all together and there is a reduced presence of partners, by definition you’re creating a caregiving crisis.”

Van Zante-Peiser met Ed more than 25 years ago at work and they became close friends. When Van Zante-Peiser became pregnant with her son, Joshua, who is now 22, Ed transformed into “a grandpa figure.” He was kind and generous. When Joshua graduated from high school, Ed gladly sat in the football stadium stands, watching 500 students traipse across the stage. It was easy for her to say “yes” to helping him.

“Ed is someone who had given so much to me personally and to my family,” she said. “It was an honor.”

“The work is the exhausting part, honestly, which took a backseat to the sad part,” she said. “(The) place that took him was lovely but it was not the full care that he needed. He didn’t just need memory care. He really needed skilled nursing.”

Elders in the LGBTQ community often face problems when trying to find nursing facilities that provide needed care while being culturally competent.

“Elders in our community are still dealing with garden variety discrimination in care and services whether that comes from the care workers, peers,” Adams said. “The facilities that provide that care and services often are not well equipped to work effectively and respectfully with LGBTQ older adults.”

For many, lack of money and support means they might not even have a chance for care.

“The first issue facing LGBTQ older adults are very high levels of social isolation and thin support networks,” Adams said. “Research indicates that there are higher levels of poverty among LGBTQ older people and that’s especially true among older lesbians, among transgender elders and among LGBTQ elders of color.”

Older people in the LGBTQ community also experience unique health complications, which require specialized interventions that some nursing facilities might not be equipped to address.

“There is a much higher incidence of HIV among LGBTQ older people,” Adams said. “But that’s not the only health issue. There are more significant mental health issues that frankly come from a lifetime of facing marginalization and discrimination. More significant substance abuse issues come from the same place.”

Maryanne Miceli serves as the Sage coordinator in Albuquerque and noticed so many elderly folks needed help with anything from daily tasks to transportation to doctor’s appointments. She became the “daughter” to several elderly people she knows.

Miceli started an organization to address some of the issues older LGBTQ people encounter. Called Silver Rainbow New Movement, she hosts meetups so people can socialize. But, she also provides some food, hygiene items and other services.

She recently helped someone navigate a thorny financial situation, provided copays so someone could attend therapy and helped others manage their medications. Her elderly LGBTQ family members think she’s a “guardian angel.”

Sage and other organizations offer culturally competent training to skilled nursing facilities and they hope to expand such offerings. But more needs to be done.

“Ultimately what we need to do is open up the larger care sector so that it’s welcoming of LGBTQ older people. But in the meantime, we’re creating some of our own (training),” Adams said. “Support for caregivers of LGBTQ older adults is critically important because often they’re not adult children … they face their own challenges.”

Van Zante-Peiser had volunteered with Sage. After Ed died, she was speaking with a staff member about her experience.

“She listened when I cried about what could have gone differently,” she recalled. “At the end of this half hour conversation, she said, ‘We have these fact sheets in our resource center. Would you consider writing a fact sheet?’”

Van Zante-Peiser is grateful she had the chance to share what she learned to help others.

“It’s a value to anyone doing caregiving. It’s really about the essence of being with people,” she said. “His legacy is going to continue and there will be value made out of extreme distress.”

This article was originally published in TODAY on November 29, 2021. 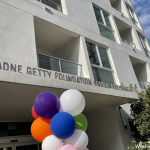