For older LGBTQ+ caretakers, together can still feel alone against aging and illness

In: Health Care, In the News, LGBT Aging, Social Isolation

About 75% of LGBTQ+ adults 45 and older are concerned about having enough support from family and friends. Severe illness and aging can worsen the sense of isolation

A gold band decorates Hermina Ban’s left ring finger; her wife’s hands are dotted with a garland of bruises from the chemotherapy.

The couple met in the San Fernando Valley in 1994, finding they both had a love for theater, activism and mentoring. Ellen Brunot daylighted as a history teacher and worked as a stage manager in the evenings, Ban was a social worker for adolescents and an avid theater patron.

But for the last 10 years they’ve been together, Ban has been Brunot’s caregiver.

The aloneness of caregiving and the stress of decision-making, Ban shares, weighs on her. “If we had like aunts, uncles nearby, grandkids, and kids, that’d be a whole different story,” said Ban.

About 75% of LGBTQ+ adults 45 and older reported concerns about having enough support from family and friends as they age, a 2018 AARP report found.

“Several of our LGBTQ+ seniors, who came out in an era when they weren’t allowed to be open about their sexuality and gender identity, lost a lot of their important relationships, family systems,” said Yelba Carrillo, the former senior program manager of LA LGBTQ+ Center’s Senior Services. “Many also don’t have children to rely on. And so as they age, they don’t have the supports that a typical heterosexual person may have.”

While both Ban and Brunot’s families have been supportive, Brunot’s relatives are spread across the U.S., with no kin nearby. Ban, whose nuclear family immigrated from Israel, cared both for her mother until she died in 2020 and her brother who died in 2021.

Ban came out when she was 18, right into the counterculture movement of the ’70s. “I never really felt vulnerable back then, because we were just tough, you know? I mean I was like 5 foot 5 and a half, and just had a demeanor that was kind of strong.”

“We were infallible,” Ban said with a grin. “Those were the fun days, oh my goodness. It was all about the counterculture, and going to love-ins.”

In the 80s, the HIV/AIDS epidemic hit, and many of Brunot’s male friends got sick and “just disappeared. There were the ones we took care of, just the whole slew of people.”

Brunot worries now that, despite all the victories, they are not safe. “To have lived through periods of time where being gay was illegal, you could lose your job — you would be beaten up. I mean, it still is not safe. And I think as I have gotten more disabled and the two of us have gotten older, that has really begun to scare me more.”

‘Backs against the wall’

It started with Brunot’s sudden kidney failure in 2012. Brunot hung up the black clothes and quit her theater work to start peritoneal dialysis at home. “Everyday, I unplugged in the morning and went to school and taught, then came home in the afternoon and then plugged myself back in,” Brunot said.

After they married in 2016, Ban was showing her wedding ring to Andy Greene, a work acquaintance who asked her about honeymoon plans. Ban said travel wasn’t an option due to Brunot’s dialysis, and since Brunot had a rare blood type — O negative — the likelihood of getting a kidney donor was difficult, if not impossible.

“I asked her, ‘Well, would you be interested in donating a kidney?’ It was a throwaway statement,’” Ban said. “I gave her the doctor’s information, but told her I wasn’t going to pressure (her) about it… but she kept coming back and giving me updates, that she had met with her doctor and learned about the different hoops she had to jump through.”

The woman donated one of her kidneys to Brunot. “I really thought, oh my god, we’re getting a second chance to have a life again,” said Ban.

Brunot recalls, “It all seemed like a miracle, I was going to go back to work, and [Ban] was going to retire, and we were going to start traveling, and do all kinds of things.”

Brunot opted for treatment, a hysterectomy followed by rounds of radiation and chemotherapy for five years, which impacted her precious donated kidney. “They’re playing a very delicate and dangerous game with my immune system,” Brunot said of her oncologist and nephrologist, who described her cancer as a Whack-A-Mole.

By December 2021, a second malignant tumor emerged on Brunot’s bladder that has nearly doubled in the last six months. In April 2022, her oncologist said the chemotherapy wasn’t working. They had burned through all the options, and chemotherapy was jeopardizing Brunot’s new kidney function, which had fallen to 23%.

She could choose to remove the bladder, but the cancer could come back. Or she could start immunotherapy, but that meant giving up the kidney and restarting dialysis.

“Our backs are up against the wall,” Ban said.

Although many LGBTQ+ older adults describe positive relationships with their healthcare provider after years of trial and error — over 50% many have concerns about discrimination or prejudice affecting their quality of care, per the AARP report.

“Whenever we go to the hospital, I want to dress more professional casual just because I want them to take me and us seriously and not pigeonhole us,” said Ban. “So I feel how we present ourselves is important and we’ve had, from my point of view, we’ve had nothing but really positive experiences, in terms of how they receive us or how they react to us.”

That fear is pervasive. “There has been a lifelong history of stigma, discrimination towards folks that oftentimes leaves us resistant to seek help,” said Sherrill Wayland, director of Special Initiatives at Services & Advocacy for GLBT Elders (SAGE). “If I reach out, how will I be treated? Will I be welcomed? Or will I face discrimination and stigma?”

As Brunot declines and Ban has more responsibility over her care, they had initially decided to go with the immunotherapy, with the knowledge that Brunot will be back on dialysis shortly. What followed was a grueling roller coaster of immunotherapy treatment, hope, hospitalizations, and disappointment.

However, just last week, they learned that the cancer had metastasized, and the oncologist said that it was the end of any treatment. “I’m totally heartbroken,” said Ban.

On a good day, Ellen Brunot makes all her benchmarks. “I don’t pee myself, I don’t fall over and break furniture or dishes or injure myself. And I love my wife and I talk to my family on the phone and I text with my friends and I get endless baby pictures of my nieces and nephews coming in from all over the United States.”

Brunot takes her meals in bed nowadays, atop colorful animal trays. “I favor using the brightly colored birds in the morning, and the elephant family at night.”

“The color, it brightens things up,” Ban said. “It’s important, I think, to have color to be cheerful.”

Included in the breakfast spread are Brunot’s pills, gently poured into a large, cracked teacup, a small joy holding a difficult reality. The teacup is painted with Sakura, or cherry blossoms — a relic from a past life when they supported the Japanese Tea Garden in Golden Gate Park.

Brunot had broken this last of the teacups, and Ban glued it back together.

SAGE Launches Old and Bold: Services for All in Celebration of Pride MonthPress Releases 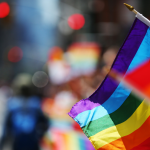