This post originally appeared in the Fall 2016 issue of SAGEMatters. 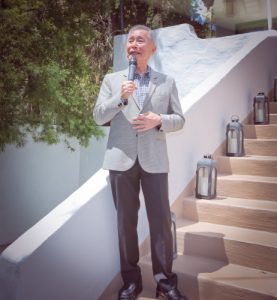 Q. SAGE believes that we have a responsibility to make diversity and inclusion a centerpiece of our purpose, our people and our work. You once said “diversity is one of the strengths of our society.” What does that mean to you?

George Takei: In addition to strength, with diversity we become a more vibrant, engaging and humane society. The community we live in gains strength by the power of the endowments of its members, be they muscular, intellectual or innovative. We also become richer for the performing, creative and artistic talents of the people. We become more vibrant by the inclusion of people of different cultures, histories, faiths and experiences. And we become a more humane society by embracing all people in need. As we say on Star Trek, “infinite diversity in infinite combinations.”

Q. How has playing a starship helmsman on television and steering public opinion in real life contributed to your career revival? Any tips for older workers out there?

Takei: In show business, there is the term “to be between engagements.” I don’t like not being engaged. All my life, I have not only pursued an acting career but have also created my own ‘engagements’ when not gainfully employed as an actor, whether it be political activism, public service, writing or, having discovered a fascinating advance in technology, social media. I don’t understand this thing called “retirement.” I think life is to be lived.

Q. This summer marked the one-year anniversary of the Obergefell v. Hodges ruling—what you called a “landmark day for all Americans.” What do you think the next frontier is for the LGBT community?

Takei: It is the backlash to nationwide marriage equality. Just as the Voting Rights Bill, which was signed by President Lyndon Johnson back in 1965, is still being resisted by those who are trying to place obstacles to access to the ballot box for minorities, the same kind of backlash is happening with nationwide marriage equality. The totally transparent cloak for this bigotry is the cry of “freedom of religion.” And the battleground now is the bathroom, of all places! But, as in Indiana and Arkansas in 2015 and North Carolina and Mississippi now, ultimately we will have to rescind their hateful laws. The struggle continues.

Q. You came to Twitter and Facebook when you were 74 and you now have millions of followers. These platforms have allowed you to push for LGBT rights across the country. You were the public face of #BoycottIndiana after the state enacted a religious freedom law that allowed people to deny services to LGBT people based on their religious beliefs. You also led another social media charge against a similar law considered in Arkansas. Do you think we are going to be fighting bills like this for the next few years?

Takei: As I said above, the struggle for access to the ballot box is still being fought more than a half century after the Voting Rights Act was signed. But I also keep in mind that Loving v. Virginia, which granted interracial marriage, was ruled in 1967. When Brad and I were married in 2008, we were barely conscious of the fact that our marriage was interracial as well as same-sex. Our marriage was less than a half-century after Loving v. Virginia. I remain an optimist.

Q. SAGE’s mission is to advance successful aging for our LGBT elders so that they can live a vibrant life. Physical health and humor are both important to you. What principles of successful aging would you say make the most difference?

Takei: There is no one magic formula. It is a combination of many qualities. Physical health and good humor are important parts. Keeping the mind and body engaged, which means exercising both regularly—ideally daily—is also essential. Eating well and in moderation is also key. An optimistic view of life is vital. I rejoice in each and every birthday. It was my grandmother’s favorite hobby. She amassed a handsome collection—104 of them. She was a cockeyed optimist. My number one tip is to find joy in each and every day. Every morning, sunny or cloudy or rainy or torrid, is a wonderful gift. Enjoy it.

Read the interview on page 16 in the Fall 2016 issue of SAGEMatters.