PAUL KUNTZLER was one of the earliest members of the Mattachine Society in Washington, D.C.

JIM OBERGEFELL won the landmark Supreme Court case Obergefell v. Hodges that gave same-sex couples the right to marry in all 50 states. Jim is also a SAGE Board Member. 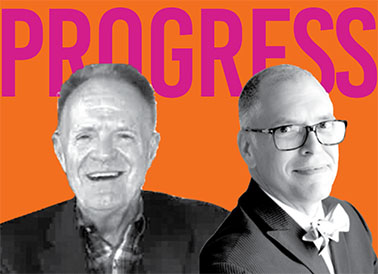 Paul: There were three people who deeply inspired me. First, my partner, Steven Brent Miller, who I was with for over 42 years when he died in July of 2004. Of course, the late Frank Kameny who I met on Sunday evening, February 25, 1962. And President John F. Kennedy. He’s the reason I live in Washington, D.C.

Jim: I was going to say my late husband John, so I love that we both started with our partners of multiple decades. When I feel tired, I just think about John and the fact that I fought for him and for our marriage, and that just keeps me going
forward. And I was also going to say Frank Kameny because he was instrumental
in so many things. He was one of those people willing to put his entire life on the line for what he believed in—for himself and for his community. And I also have to say—Edie Windsor. I think about her almost every day and I wouldn’t be in the place that I am in the fight for equality if it weren’t for Edie. I love and miss her dearly. Also, l’d like to point out the inspiration of our younger generation in general, and, in particular someone like Adam Rippon who is so unapologetically himself. Here he is, in the limelight. He inspires kids everywhere, and he inspires me because I see the difference created in our world because of people like Frank, Harvey Milk and Edie. So, it’s really the kids today because they aren’t afraid to wave their flag of individuality, and they don’t apologize for it.

What about the backlash of the past year? Did you see it coming?

Jim: We knew there would be a backlash after marriage equality, but when they lost, they really went after our transgender community. Am I surprised at the backlash? Am I surprised at the vitriol we are experiencing? I am, unfortunately. But I try to be hopeful and think that hatred won’t win. We just need to remember that and we have to keep on fighting for every other community that is at risk.

Paul: I believe that in terms of what’s been happening around the country in local elections and congressional seats, it points to strong gains—especially encouraging for next November. Back in the 60’s we couldn’t conceive of the progress we’d make. And I’ve been astonished— especially in the past 10 years—how much progress there’s been. We can’t forget that. 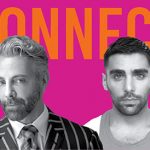 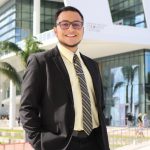