Larry Kramer was a ferocious HIV/AIDS activist, a passionate change-maker, and a true icon of the LGBT equality movement. Our community mourns his loss, and celebrates the spirit to fight for change that he inspired in so many of us. For HIV Long Term Survivors Awareness Day, we honor his memory by sharing the voices of fellow long-term survivors as they reflect on his life and work.

ACT UP! Fight back! Fight AIDS!
By: Jeff Berry

I regret that I never got to meet Larry Kramer in person or interview him, but, as he did on so many others, he had an incredible effect on my life and left an indelible mark on my work. As I look back over the years, I sometimes wonder what Larry might have thought or said to me. Would he have screamed at me that I wasn’t doing enough? Probably. Would he have been right? Maybe, sometimes. But dammit I’m alive because of this man.

I remember marching in Washington, D.C in 1996, during the candlelight vigil from the Capitol Building to the Lincoln Memorial for the AIDS quilt display. Along the route, we passed the pitifully small Fred Phelps contingent with signs raised proclaiming that “God hates Fags” and other hateful slogans. I became incensed. I was filled with rage. I suddenly started shouting, “God doesn’t hate!” and “Shame! Shame! Shame!” and suddenly my fellow AIDS activists and the others I was marching beside began chanting along. It was invigorating, intoxicating, liberating. And that night, my activism was born.

It came later in life (I was diagnosed in 1989), but, my age, for me, didn’t make activism any less meaningful or impactful. I feel a kinship in many ways with all of the ACT UP activists who came before me, and people living with HIV who created the self-empowerment movement. And especially the young people today who are picking up the torch. They give me hope.

The Legacy of Larry Kramer
By: Rick Guasco

I was a high school freshman when Larry Kramer’s first book, “Faggots” was released in 1978; it was the first gay novel I read. Although it was a rather pointed parody of gay life in 1970s New York, it opened my mind to a new gay world I’d never imagined, and helped prepare me as I started to venture into Chicago’s gay scene.

I was in college when his essay, “1,112 and counting,” appeared in the New York Native in 1983. It was a call to arms to gay men, sounding the alarm about the growing AIDS epidemic. “If this article doesn’t rouse you to anger, fury, rage, and action, gay men may have no future on this earth. Our continued existence depends on just how angry you can get,” he wrote in the opening paragraph.

I felt its urgency, but as a young gay man in the Midwest who was not quite closeted nor fully out (I went to dance clubs with my boyfriend, but never told anyone straight that I was gay) I felt a lurking sense of dread and inevitability.

You didn’t have to be gay man living in New York to identify with the characters in his 1985 play, “The Normal Heart,” or to be swept up in its passion. I only read about it—interviews, reviews—and was enthralled. But I also wondered, will this happen to me?

In 1992, I developed Kaposi sarcoma, although it wasn’t until December of that year that I ever went to get tested for HIV. Fortunately, I found a clinical study that treated my KS. However, it took over two years for the 150 skin lesions I had developed to fade away. In quiet moments, Larry’s characters sometimes came to mind. I wanted to be one of the ones who lived.

While attending AIDS 2012 in Washington, D.C. I got to watch a special stage performance of “The Normal Heart.” What person living with HIV isn’t going to cry during an AIDS play? But mixed in with the profound sense of loss was a humbled feeling of gratitude and a desire to serve, to make a difference in the lives of other people living with HIV.

The closest I ever got to seeing Larry Kramer was in his recorded address at USCA 2018. He’d been scheduled to be the keynote speaker, but was too ill attend. Still, on the projection screen, there was the anger and the fire that had propelled him through the decades. He’s been a longtime companion—if only from a distance. Although I feel the urgency, I don’t have his rage, but Larry Kramer inspired me all my life with his words. 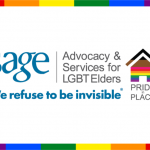 Join us! Celebrate Pride In PlaceAnnouncements 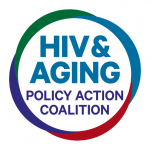