Even before the pandemic, many LGBTQ+ older people struggled with poverty. In fact, 35% of SAGE’s New York City clients are Medicaid eligible. However, this is not just a problem in New York City. As the Center for American Progress (CAP) reports in An Effective Response to the Coronavirus Requires Targeted Assistance for LGBTQ+ People, more than a third of the LGBTQ+ participants in its national survey had household incomes of less than $35,000 a year. Furthermore, CAP reports that “LGBTQ+ people and their families are also more likely to rely on federal benefits such as the Supplemental Nutrition Assistance Program (SNAP), Medicaid, subsidized housing assistance, and unemployment insurance.”

As LGBTQ+ older people struggle to make ends meet, many look to worker protections and the Supreme Court’s recent decision in Bostock v. Clayton County, which confirmed that Title VII bars discrimination on the basis of sexual orientation and gender identity.  The implications of this decision have the potential to be far reaching. For example,  the first director of the Consumer Finance Protection Bureau (CFPB), Richard Cordray, ties the decision to the ability of LGBTQ+ older people and others to access credit.  As he writes in a recent opinion piece in USA Today, the Supreme Court’s decision in Bostock bolsters an argument that Director Cordray himself made in a letter to SAGE back in 2016, where he stated that discrimination on the basis of sexual orientation and gender identity are prohibited by the Equal Credit Opportunity Act’s bar on sex based discrimination.

As he writes, “For members of the LGBTQ+ community, protection under the federal consumer laws assures the economic opportunities that flow from access to credit. It means they can no longer be redlined or ousted from their homes. It means they cannot be denied public health services based on mere prejudice. It means they cannot be refused a loan or be subjected to less favorable terms unrelated to their credit standing.  In short, it means that the right to love who they choose will extend beyond marriage and carry forward into every aspect of their economic lives.” 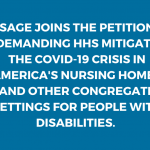