SAGE is proud to stand beside our fellow advocates and change-makers in the Diverse Elders Coalition as we fight together to build a more equitable and age-inclusive world for everyone. This Pride month, hear what some of our coalition members are doing to celebrate #PrideInPlace! 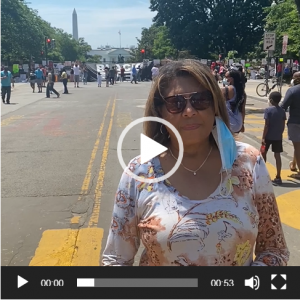 The National Caucus & Center on Black Aging, Inc. was founded in 1970 to ensure that the particular concerns of elderly minorities would be addressed in the then-upcoming 1971 White House Conference on Aging. Since then, NCBA has helped protect and improve the quality of life for elderly populations, making certain that legislators, policy makers, philanthropists, advocacy groups, service organizations, thought leaders and the public at-large include minority seniors in their programs, policy- and law-making, and giving.

Southeast Asia Resource Action Center
For LGBT Pride month, Southeast Asia Resource Action Center (SEARAC) will be uplifting our solidarity with LGBT communities and spotlighting stories of power and resilience.  We began the month of June by transforming its blue logo into rainbow colors to celebrate PRIDE. Later this month, SEARAC will be featuring spotlights of Southeast Asian American (SEAA) members of the LGBTQ+ community who are doing important work during this 45th anniversary year of SEAA refugee resettlement, by organizing youth, fighting for visibility through census, and uplifting intersectionalities with the Black Lives Matter movement. These profiles will be included in SEARAC’s community stories blog and circulated on social media. Finally, SEARAC will be observing World Refugee Day on Saturday, June 21, along with Immigrant Heritage Month, by launching a fundraiser in support of organizations providing direct relief to individuals and families impacted by COVID-19, including those in the LGTBQ+ community.

SEARAC is a national civil rights organization that empowers Cambodian, Laotian, and Vietnamese American communities to create a socially just and equitable society. As representatives of the largest refugee community ever resettled in the United States, SEARAC stands together with other refugee communities, communities of color, and social justice movements in pursuit of social equity.

NHCOA, in conjunction with SAGE and the Diverse Elders Coalition, honor the 51st anniversary of Stonewall uprising with #PrideInPlace

June is recognized as Pride Month by the lesbian, gay, bisexual and transgender (LGBT) communities; with many Pride events occurring throughout the month and on the last Sunday in June to commemorate the anniversary of Stonewall.  This year, the National Hispanic Council on Aging joins SAGE and the Diverse Elders Coalition in celebrating Pride Month and honoring the Stonewall uprising with the Pride in Place Campaign. Pride in Place is a way to celebrate Pride wherever you are; remembering that pride is a state of mind, and our pride will persevere against all odds.

On June 28, 1969, New York City police raided the Stonewall Inn, a gay club in Greenwich Village. The raid sparked an uprising among Stonewall patrons and its surrounding communities as the police forcibly removed employees and patrons from the club. This event, sparked six days of protests and violent clashes with law enforcement – serving as the catalyst for the LGBT rights movement in the US and worldwide.

Remembering and honoring this event is especially important in 2020 as we have seen protests and uprisings across the country and even across the globe in response to, yet another string of people of color murdered by the very hands sworn to protect them, law enforcement. We ask our communities to join us this month and as we move forward to let the Pride in Place campaign serve as another source of inspiration for combatting systemic racism and all other isms that are rampant in the United States.

More than 50 years ago, LGBT leaders showed us that change can come by refusing to be invisible and refusing to be silent – this is a lesson we can learn from. While the struggle for equal rights continues for LGBT people, battles have been won. Last week, the US Supreme Court, in Bostock v. Clayton County, Ga., extended the protections of Title VII of the Civil Rights Act of 1964 to LGBTQ+ people. While this is a major victory, we must acknowledge, that in 2020, we still need the highest court in the land to tell us that it is not ok to fire someone because of their sexual orientation/identity. There is still work to be done to achieve equity in the United States, but together, we will continue the fight.

NHCOA is the leading national organization working to improve the lives of Hispanic older adults, their families, and their caregivers. Headquartered in Washington, DC, NHCOA has been a strong voice dedicated to promoting, educating, and advocating for research, policy, and practice in the areas of economic security, health, and housing for Hispanic older adults, families, and caregivers for more than 50 years. For more information about NHCOA call 202-347-9733 or visit www.NHCOA.org.