Walking on the Backs of Those Who Died 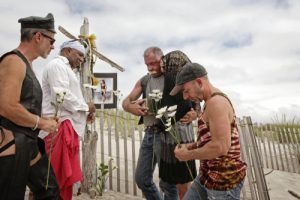 Years after the HIV/AIDS epidemic ravaged millions of lives, survivors carry on the stories of their loved ones and search for hope that a cure will be found. Photographer Lester Blum and Creative Director Vladimir Rios talk with SAGE about their works, “Warrior of Hope” and “I Still Remember,” both currently on exhibit at SAGE Center Midtown.

SAGE: Can you talk about the process behind creating your exhibits? What are similar themes throughout, and how are they in conversation with each other?

Blum: The similar theme is that they are both works of social implication. “Warrior” and “I Still Remember” are both about HIV and AIDs from slightly different perspectives. They both honor people who have passed. They are really designed as educational tools to increase awareness, to tell the younger generation what actually transpired.

Rios: Not only social implications but something everyone can relate to, not just the LGBTQ+ community. We happen to be gay, but every single aspect of our work has been tailored to society in general, not just gay society. Throughout all the work you see straight and gay people, you see people of color, minorities—a wide variety of people. We try to create something universal that everyone can relate to, either immediately or maybe with a little push. HIV is a hard subject for people to deal with even today.

Blum: The themes are really universal. For example, “Warrior of Hope”—everybody needs hope, no matter what issues they have. The Warrior offers this hope. “I Still Remember”—if you really break down the story behind the exhibit, it’s about love, devastation and remembrance. The two main characters just happen to be male. The loss could be anything—cancer, age, or a car accident. It’s a universal story.

SAGE: In both of your works you two portray nude, older bodies. What does it mean to represent a body type not often seen in the mainstream?

Rios: We presented the nakedness in different shapes and sizes because naked is naked. Everyone is beautiful in different ways. We don’t all have “Chelsea boy” bodies. There’s a lot more to our society than being a “Chelsea boy.” We are all different—ages, color, body shapes; it doesn’t matter.

Blum: In “Warrior,” there was one man who was 82, and then a couple in their 70s. That whole 28-year-old “Chelsea boy” body perfection takes away the seriousness of the projects. It becomes a pretty calendar but it’s not reality. You do a scene like those presented in “Warrior of Hope” and “I Still Remember” with only “Chelsea boys,” and there would be no message presented.

Rios When it came to “I Still Remember,” the explicit nudity in some of the photographs was necessary to convey a message. We went to a sex club and filmed a sex scene. It’s just like the needles in the drug segment. Everything was real. We photographed it on the streets. When I did the doctor’s office scene, the doctor actually drew blood. I did everything as real as possible. It was done in this manner because I wanted to keep my integrity as an artist.

SAGE: This is an intergenerational collaboration. Can you speak to the ways your differences contributed to your work?

Rios: It’s weird to explain. Lester just turned 70. I just turned 46. It’s funny because every time we do a project we are in tune with the vision. Because we are best friends, we do a lot of things together. We have a similar thought process while often approaching projects from different perspectives.

Blum: I just think we bring different elements from our backgrounds together. It enriches the experience and the projects. Besides age, we come from two completely different backgrounds and heritages. Rios was born and raised in Puerto Rico. He worked for many years as a social worker, which gave him insight into the thinking of many individuals from all walks of life. Therefore he brings a different cultural and social heritage to the table. I was born in New York, raised in Texas, returned to New York over 40 years ago. My background was in the fashion industry, which gave me an artistic understanding and the ability to comprehend the corporate environment. This diversity of culture, upbringing, and work experiences mesh together, allowing us to create the strongest projects we can. If two people are actually listening to each other, which we consciously try to do, it widens the perspective. That is often a problem, particularly in my generation. They don’t want to listen. They are too set in their ways and thinking.

SAGE: What do you think a commemorative piece that goes back into history tells us about moving forward?

Blum: I’m not so sure whether it tells us much about moving forward as much as it tells us what transpired. “I Still Remember” is a capsule of life during the pandemic of AIDS. It shows how an entire generation was lost. It teaches those 25 and younger that they’re basically walking on the backs of those who died. What happened during that ten-year span of time enabled those who followed to be the people they are today, even with all of today’s struggles. The younger generation can’t be complacent. They can’t just sit back. They can’t just pop PrEP and say that everything is fine. It’s still not. The disease is still here. People are still sick.

Blum: You can’t just discount the past, like it didn’t exist. As long as someone can tell the story, the people aren’t really gone. They’re remembered.

Both exhibitions will move on to the LGBTQ+ Center of Durham, North Carolina, and to The Loft in White Plains, New York, for World AIDS Day 2016. See more of Lester Blum’s photography.