Bruce Williams was discriminated against because of his sexual orientation as recently as 2012, but he’s working to make sure that becomes a thing of the past. 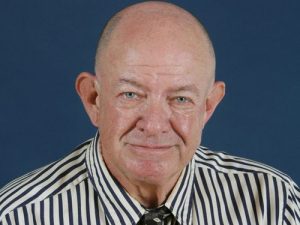 Williams, 69, is the first senior services coordinator with The Pride Center at Equality Park, a nonprofit center that serves the LGBT community of South Florida. He began volunteering at the center eight years ago and eventually became president of the senior advisory committee.

The senior programming arm of The Pride Center creates critical connections among providers and recipients. Coffee and Conversation, a weekly two-hour program, attracts 200 attendees, up from 30 to 50 attendees just four years ago. The event is one of the nation’s largest weekly gatherings of LGBT adults according to the national organization Services & Advocacy for Gay, Lesbian, Bisexual and Transgender Elders (SAGE).

“I like to use new and different approaches,” Williams says. “I like to maintain a flexibility. What worked yesterday does not work today; what works today may not work tomorrow.”

Williams should know—he spent nearly 25 years running a Houston, Texas, continuing care retirement community. From 1981 to 2006, he served at different times as assistant director and acting director of Treemont Retirement Community, where he oversaw residential life and 200 employees associated with 330 independent living apartments and a 114-bed healthcare facility.

“His experience in the long-term care community gives him the knowledge, insight, hands-on practical applications, purpose and compassion that he brings to the center. A senior himself, he is the perfect example to those he serves,” says nominator Betty Rosse, a professional educator, public speaker and group facilitator, who has presented at the center.

To provide quality care to LGBT persons, as with any other population, Williams says, “You have to be accurate reading what people need and require.”

Older adults in the LGBT community grew up in a world of homophobia. They remember the Stonewall riots and the McCarthy hearings. “There’s tremendous intolerance and bigotry that exists,” Williams says, adding he did not live an openly gay life until 2009.

Discrimination because of one’s sexual orientation can cause isolation, distrust and fear, which impacts how willingly long-term care services are pursued. For anyone who “has grown up their whole life with stigma,” the reluctance to discuss sexual orientation and openly engage with senior service representatives, healthcare providers and community agencies is warranted, he adds.

“With my background in long-term care and acute care, I came here with a mission. I know the value of advance planning,” he says. “I spent 25 years in the field of long-term care. I am well aware of how using the services of long-term care will tremendously enhance the final third of one’s life.”

This year, The Pride Center began serving as SAGE-authorized trainers under the Protect our Elders initiative subsidized by Our Fund, a Florida philanthropic organization. SAGE’s curriculum teaches best practices when serving LGBT seniors. South Florida healthcare and service professionals will complete the first phase of training through The Pride Center and other local trainer agencies. The training carries continuing education credits for degreed workers in the field of LTC services.

A hallmark of the Protect Our Elders curriculum is promoting cultural competency. The concept, with roots dating back to the 1980s, promotes awareness and respect about others’ differences and cultivates a willingness and ability to be responsive through appropriate attitude and policy.

Williams wants people to proactively address matters of aging and be vocal about what they value in service delivery. His message: don’t postpone making the “appropriate moves, the appropriate changes, at the right time.”

“It’s as simple as posting a picture of a same-sex couple, for example, among an array of portraits featured in continuing care retirement community’s main lobby,” he says. “It shows acceptance.” It’s as straightforward and respectful, he adds, as using the word “partner” on a doctor’s intake questionnaire or on a housing application.

“I am making people aware of the possibilities—they have the choices.”

Sharon Schnall is a writer based in Ohio.

Copyright © 2020 All Rights Reserved | Privacy Policy
A New LGBTQ+ Victory Is a Victory for All of Us: The Social Security Administration Does the Right ThingArticles
Talk Before You Walk: Considerations for Older Couples Before Getting MarriedAnnouncements
X
X
Share
Tweet
Share
Email