From Connections to Community: Data-informed lessons on an intergenerational gathering 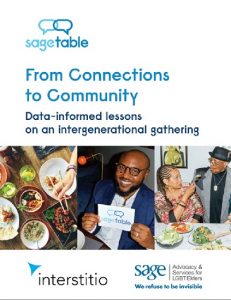 “Who is going to be taking care of us when we’re old?”

This issue is an especially acute one for LGBTQ+ individuals. In a recent survey conducted by The Economist, representative samples of people in four large countries—America, Brazil, Italy, and Japan—were asked a set of questions about end-of-life care. In all four countries, the majority of people said they hoped to die at home, although far fewer actually expected to be able to do so. The gap between what people hope for with regards to aging and what they get is stark and deeply human in its complexity.