In today’s world, women of all ages are largely overlooked, discouraged, and unsupported in accomplishing their goals. This is especially true in the LGBT older women’s community. It is critical that in the larger community we are empowering and elevating the voices of women of all ages and backgrounds. With this in mind, SAGE is celebrating the following individuals: 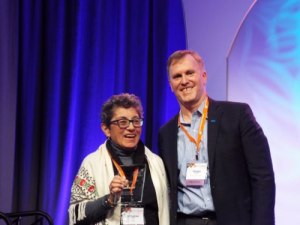 Who are some of your favorite heroines? It can be a celebrity, a friend, or an inspiring family member like mine.Katherine Acey, recipient of the SAGE Award for Excellence in Leadership on Aging Issues, is exceptionally noteworthy. Acey, an Arab American, is a highly respected feminist in the LGBT older adult community. She was the executive director for Astrea Lesbian Foundation for Justice for 23 years. Two other notable heroes are Ruth Berman and Connie Kurtz, recipients of the SAGE Pioneer Award. Berman and Kurtz have been together for 42 years and married since July 26th, 2011— two days after New York recognized marriage equality. Featured in the documentary, Ruthie and Connie: Every Room in the House, the couple fights for the protection and equality of LGBT elders.

When I was asked to write about the significance of Women’s History Month and SAGE’s work with women throughout the years, I spent days racking my brain trying to think of who I could claim as an inspiring female role model. I thought about women in history like Audre Lorde, Ruth Bader Ginsburg, and CeCe McDonald. Or maybe I’d list some of my best friends, who are all doing incredible work for the women’s rights movement. While making burritos for my partner and I on a Sunday night, my mind suddenly went to my female role model: my 14-year-old cousin, Olivia Najarian.

I first heard about the remarkable work Olivia is doing with the World Bicycle Relief through her mother’s Facebook. World Bicycle Relief is an organization that provides bikes to people in communities that are less fortunate. In April 2015, Olivia kick-started her work with the organization by writing an essay for their blog on why she wanted to fundraise for them, and the importance of certain disparities between western culture and that of other parts of the world. She is currently working on a project of her own called Good Spokes, a nonprofit that aims to provide safe access to education on health care for people in need. Olivia is just one example of what a young woman can achieve with a bit of support, encouragement, and a lot of determination.