In: HIV/AIDS, In the News, Social Isolation, Wellness

NEW YORK — Alone again, Diedra Nottingham spends her days flipping through photo albums of dead friends. She hasn’t left home for weeks, fearing “death by touch,” she said. Typical of her generation, Nottingham, 69, a lesbian residing in Stonewall House, the city’s first LGBT-friendly affordable senior housing center, is trapped in memories of how to survive a plague. She escaped HIV infection by being celibate for a decade, although she lost a brother, two foster brothers, an ex-girlfriend and a dozen friends to that other pandemic. Now with the coronavirus lockdown, “it’s like a bad memory come back to haunt you,” she said.

In 1991, AIDS activists scaled the rush-hour timetables at Manhattan’s Grand Central Terminal and unfurled an ominous banner: “One AIDS Death Every 8 Minutes.” They called it a “Day of Desperation.” Those days are back. And now, as then, New York City has more deaths than anywhere else in the country.

Citywide, a death due to covid-19 comes roughly every 10 minutes, and some days it’s one every four minutes, according to daily reports from city officials. For the city’s roughly 800,000 LGBT residents — especially elders, who find themselves among the most at risk once again — the coronavirus pandemic’s woes of loneliness, panic, and fear of being vulnerable to infection are searingly evocative of the HIV/AIDS crisis a generation ago.

“People were just living their life. One minute they were with you at the club and the next day at an ER being intubated because it came on so quickly,” said Philip Monaghan, 65. “You didn’t know if you got it from a bar glass or a towel at a beach house or that guy you slept with last week. You’d sit around wondering: Do I have it? Just from standing around I thought I was going to get it.”

Monaghan has been HIV-positive since 1993 and had lost 40 percent of his address book by then. About covid-19, he said, “It feels so chillingly familiar, and it’s bringing up a lot of emotions for many of my peers who lived through the early days.”

John Kelly, 65, a dancer with asthma and bronchitis, has had HIV since 1989; but covid-19 got him to prep a go bag for the hospital.

In interviews about the AIDS crisis, gay elders recalled being shunned by churches, having cashiers drop change into their hands to avoid touching, nurses leaving food outside hospital rooms, and even friends and relatives crossing the street to avoid them, or throwing out the dishes after they’d come over for dinner.

“Memorials became our new social lives and caregiving our lifestyle,” said Guy Lawrence Aiossa, 67, a retired hair stylist who lives at Stonewall House. “Our uniforms became sneakers and jeans so we could run from visiting one sick person to another sick person.”

Today is not as bad as that — yet.

“My assistant had [covid-19] and was like, ‘I can’t taste!’ but that’s not AIDS, honey,” said Daniel Nardicio, 53, a longtime New York nightlife impresario. “It’s not like I’m losing three friends a week.”

But for many LGBT people, a rage felt long ago has returned: fury at the government over its haphazard initial response, suspicion about abatement or promises of a vaccine, and anxiety about how much worse this could get for the marginalized.

Larry Kramer, an HIV-positive playwright who in the 1980s co-founded AIDS-focused support and advocacy groups, attacked President Trump’s handling of the crisis and drew a corollary to Ronald Reagan’s often criticized approach to confronting AIDS (although Kramer called Trump “worse than Reagan”). “How do we have him actually acknowledge the stupid things he’s doing that’s just getting in the way of help?” said Kramer, whose husband has covid-19 symptoms and is in isolation.

“I want to go out there and start another ACT UP again,” Kramer said, referring to his political action coalition, “but I haven’t got the strength or the energy left. I’m 85 years old. And so I feel guilty about that, because I have a voice and feel unable to use it effectively now.”

The survival playbook LGBT activists wrote during the AIDS crisis — sitting by hospital beds of sick strangers, hospice and food delivery, camaraderie and solidarity rooted in an intimate buddy system — is hamstrung by covid-19’s social distancing requirements, the quarantines and lockdowns. AIDS shuttered bathhouses and backrooms; coronavirus has shut down much more. Even sex. (“You should avoid close contact — including sex — with anyone outside your household,” a much-circulated city health department memo warned.)

“We are still seeing the legacy of where infection meets inequality,” said Ofole Mgbako, an infectious-disease specialist at Columbia University with an expertise in HIV. He called the AIDS crisis “the greatest example in history of how social inequality, racial inequality, income inequality, gender-based discrimination, homophobia, all of those things allowed a virus to run rampant in society.”

He noted that even today, decades after antiretroviral remedies, HIV infection is disproportionately prominent in the South and nationwide among black and Latino populations. Trump and others on the political right have labeled covid-19 a “Chinese virus.” Mgbako sees a parallel to the early designation of AIDS as a “gay cancer.”

“I really worry that for the same people who are left out of the conversation,” said Mgbako, “we might see more-substantial deaths.”

Many of this city’s sectors of essential work — in restaurants and hotels, construction, post offices, mass transit, laundromats and nursing homes — have prominent populations of otherwise marginalized people. Last week, as well, the Rikers Island jail emerged as a flash point of infection among both inmates and guards. But this week, evangelist Franklin Graham built a makeshift hospital in Central Park that requires its Christian staffers to adhere to a statement of faith that defines marriage as being “exclusively the union of one genetic male and one genetic female.”

The strictures have raised controversy. Mayor Bill de Blasio (D) said he was “very concerned” and City Council Speaker Corey Johnson (D), who is gay and HIV-positive, said he found Graham’s involvement in the city’s relief efforts “extremely troubling.” Graham’s organization, Samaritan’s Purse, provided a statement denying that it discriminates. The field hospital, it said, is “going to be open to all New Yorkers who need our help.”

Looking ahead, Mgbako said the AIDS crisis has taught us that we should ready ourselves for post-coronavirus survivors’ guilt. The city’s medical professionals during the AIDS crisis were so traumatized that many developed drug abuse problems to cope with the stress.

Alex Roque, director of the Ali Forney Center, an LGBT youth shelter in Manhattan, flagged coronavirus-related, gay-specific crises, such as coming out to hostile families and now having to remain with them in lockdown. “It’s interesting to hear this message of ‘go home, stay home, be safe’ and that everyone was finding that definition of safety in the comfort of their family,” he said. “Our young people didn’t have that.” His center’s March intake was up 62 percent over March 2019.

At 32, Ritchie Torres, a Democrat, is the city’s youngest councilman. Afro-Latino, gay and raised in public housing in the Bronx, he is running for Congress and recently recovered from a confirmed case of covid-19. He noted that affluent Brooklyn, with a million more residents than the Bronx, the city’s poorest borough, has the same death toll — and that Queens, the city’s most immigrant-heavy borough, has the most deaths.

“The common refrain is that the coronavirus does not discriminate, but the notion of a pandemic as an equalizer is not entirely true,” he said. “The poorest people with the poorest health outcomes and the poorest access to health care are often condemned by Zip code to be the hardest-hit.”

On Tuesday, two staff members of SAGE, a nonprofit for LGBT elders that runs Stonewall House’s social services, gave shelf-stable meals to residents like Nottingham. The center opened in December with a ceremony filled with rainbow-colored columns of balloons. Then these elders, a quarter of whom came from homeless shelters, moved in over January and were soon forced by the pandemic to become shut-ins.

Amid such gloom, LGBT Americans have a mantra: It gets better. If the country can learn to work and go to school from home, said Roque, it can learn to help from home, too. He borrowed some advice from the late Fred Rogers, star of the long-running children’s television program “Mister Rogers’ Neighborhood”: “Look for the helpers.” Kelly, the dancer, called AIDS “a huge ruptured and profound moment,” adding that for those living through the covid-19 pandemic, “there are possibilities for insight and wisdom, hopefully, in the wake of that.” Nottingham agreed: “When this is over, everybody better wake up and realize it could happen again. Or something worse. So just be kinder to people.”

This article originally appeared in Washington Post on April 3, 2020. 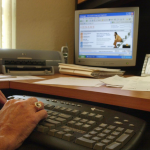