Startling mental health statistics among LGBTQ+ are a wake-up call

In: Health Care, In the News, LGBT Aging, Wellness

Diving into the numbers on mental health among LGBTQ+-identified people in the U.S., the raw numbers are just staggering.

According to a recent study by the Trevor Project, a nonprofit organization founded in 1998 focused on suicide prevention efforts among LGBTQ+ youths, 40 percent of young LGBTQ+ people have considered suicide in the last year, and that number rises to more than half for trans and nonbinary youths.

Other stunning numbers from the project include:

• 48% of LGBTQ+ youths reported engaging in self-harm in the past 12 months, including over 60% of transgender and nonbinary youths.

• 68% of LGBTQ+ youths reported symptoms of generalized anxiety disorder in the past two weeks, including more than 3 in 4 transgender and nonbinary youths.

• 1 in 3 LGBTQ+ youths reported that they had been physically threatened or harmed in their lifetime because of their LGBTQ+ identity.

Bibban Deol, M.D., is a Wayne State faculty member who also treats geriatric patients at Corktown Health Center. She noted some key trends in the patients she sees at the clinic.

“What I see in older LGBTQ+ patients is mostly anxiety and depression,” Deol says. “As they get older, they have fewer friends, and are more likely to be lonely, especially if they have a disability. LGBTQ+ people often already have the issue of being estranged from some family members. As loneliness and social isolation grows as they get older, they need access to mental health care —whether it’s counseling or medication.”

According to SAGE, America’s oldest and largest nonprofit dedicated to improving the lives of older LGBTQ+ adults, 53 percent of older LGBT people feel isolated, they are twice as likely to live alone, and loneliness can potentially shorten someone’s life by a whopping 15 years. It’s also worth noting that depression and anxiety is known to increase the likelihood of dementia.

It’s important to recognize the difference between anxiety and depression, both of which are prevalent in the LGBTQ+ community among all age groups.

People with anxiety disorders frequently have intense, excessive and persistent worry and fear about everyday situations,  or intense terror that reach a peak within minutes (aka panic attacks). These feelings can interfere with daily activities.

Major depressive disorder is a serious medical illness that negatively affects how you feel, think and act. It causes feelings of sadness and a loss of interest in activities a person once enjoyed. Other symptoms include:

• Trouble sleeping or sleeping too much

• Loss of energy or increased fatigue

• Thoughts of death or suicide

Depression can lead to a variety of other physical and mental health issues, and can decrease a person’s ability to function in everyday life.

Anxiety and depression are two different conditions, but both can be present in the same person. And everyone, LGBTQ+ or otherwise, should get these conditions treated by a medical professional.

Sadly, the end result of some mental health issues can sometimes be suicide, or attempts at suicide. One broad study of young people who didn’t identify as heterosexual found that they were more than three times as likely as heterosexual teens to attempt suicide. These are numbers that should cause alarm to everyone.

The Trevor Project reports that 46% of LGBTQ+ youths reported that they wanted counseling from a mental health professional, but were unable to receive it in the past 12 months. Reasons for this care gap include lack of health insurance and resistance from unsupportive families.

Recognizing the major impact of mental health on the LGBTQ+ community, every patient is screened for depression at Corktown, and if needed there is a full range of mental health resources are available to help them

Jay Sean Fallon, a clinical therapist and Licensed Master Social Worker at Corktown, explained that the origin of many of the LGBTQ+ community’s mental health issues stems from how they are viewed and treated by society. “Mental health encompasses a state of well-being, how we cope with life and act with others. Many in the LGBTQ+ population face discrimination from denial of opportunities, stigma, prejudices, rights violations, harassment and rejection from family and school — and even physical, mental and verbal violence,” Fallon explained. “For younger people, bullying is another big issue, electronically and face to face. And many of the teachers, doctors and other authority figures in their life lack cultural competency, which in turn leads to fear of exposing sexual orientation/gender identity and fear of being judged.”

Discrimination can lead to new and worse symptoms, such as depression, anxiety, eating disorders, substance use, self-harm and worse.

Corktown’s therapists make sure that the younger people we treat embrace their identity and treat any mental and emotional issues they are facing. It’s critical to validate each person’s experiences and emotions, and make sure they know they are not alone. It’s also very important for medical professionals to work with the families of these young people to help cultivate a more positive relationship, especially in cases of transgender youths.

Too often, doctors are not properly trained to address the concerns of LGBTQ+ patients, which can lead to avoidance of medical care — including mental health care. All medical professionals should be aware of the importance of cultural competency and learn to understand and relate to populations with whom they may be less familiar.

The statistics outlined here show we have a long way to go to address the mental health issues in the LGBTQ+ population, and the important role medical professionals can play in improving those numbers.

They also show the danger of prejudicial attitudes, which can help lead to serious lifelong mental health impacts for the victims of that prejudice.

This article was originally published in Morning Sun on August 31, 2020. 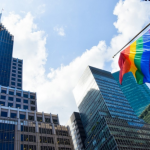 Here are 8 LGBTQ+-friendly programs in NYC if you need to find housing, temporary shelter, or roommatesDiscrimination, Housing, In the News, LGBT Aging, Wellness