Marching for Pride, retirees recall an era when being gay was forbidden

WASHINGTON – On Monday morning, a bus stopped at Fort Ward Park in suburban Alexandria, Va., and dropped off a group of passengers with mostly white hair, a few walking sticks, and rainbows on their T-shirts.

The day already felt like a steam bath, but they had slathered on sunblock and put on hats to participate in what for many was their first Pride parade. Goodwin House, their retirement community, organized the march for residents at its Alexandria location, after doing one earlier this month at its location in Baileys Crossroads, Va., both for the first time.

“I love the sign,” James Hoben, 79, said to a woman holding a placard with a rainbow-striped heart. ” ‘Love Wins’ – there you go.”

“I have an older brother who’s transsexual, and he did face all this discrimination,” Hoben said. “He had to live a double life, and that was strenuous. . . . By the time he was 10, he knew . . . and at that time, my parents didn’t understand it or accept it. They just took an attitude like a lot of other people: ‘Just change.’ ”

The U.S. government and society in general had a similar attitude; in the 1950s, the government covertly investigated employees’ sexual orientation and fired thousands of gay and lesbian employees. The American Psychiatric Association listed homosexuality as a sociopathic personality disturbance.

Now as LGBTQ people who fought for equality and acceptance in the 20th century have aged, facilities catering to them have become more welcoming.

SAGE, a national advocacy organization for older LGBTQ people, handed out its SAGECare certification this year for the second year in a row to Goodwin House, meaning employees received cultural competency training related to LGBTQ issues.

Last year, Goodwin House formed a diversity, equality and inclusion committee, which developed the plan for the Pride march.

It plans to continue the marches annually, along with other programming, which this year included a wall highlighting influential LGBTQ people.

The march on Monday began at 10 a.m. as 30 participants started down the park’s circular road.

Some strode quickly ahead; others took slower, more tentative steps. Few other park visitors were present to see them, but the mood was buoyant.

Recently, a young relative began to identify as nonbinary, and for the past few months, Wade and her husband, Doug, 79, have been getting used to using “they” and “them” as a singular pronoun.

This was their first Pride march, but not the first time they had thought about the issues. “We have been outspoken in both our churches about gay rights,” Doug Wade said.

But “in January when the phone call came with the announcement about our family member’s decision, that brought a whole other level of engagement, a direct encounter for us,” Meredith Wade said, adding that since then, they and other relatives have exchanged articles and books about gender. “It just makes it all more powerful, more real.”

Some participants marched for people who did not survive to see all the political and social advances of recent decades.

“I had a number of very good friends who died of AIDS,” said Betsy LaRoe, 80. “I still miss them.”

Judy Davis, 80, has a son and son-in-law who are gay. Her best friend starting in first grade was also a gay man; they remained friends until he died eight years ago.

“I think it’s important to appreciate everybody and their right to be who they are,” she said, adding, “Part of what I like about Goodwin House is they’re so into this kind of thing.”

Meredith Wade agreed. Her mother had lived there, so “I know its values, and this is just a natural outgrowth of those values,” she said.

While all residents may not have the same take on gay rights, she said, “If there are people that are uncomfortable with it, they’re going to have to manage around it.”

Paul Gordon, 79, a resident there who had a gay bar in the District from the 1970s to the 1990s, was one of those marching at the head of that parade.

As a gay man, he recalled being painfully aware of “vagrancy” laws targeting gay men in Virginia and D.C. “They were just barbaric, and I fought very hard to change those laws, and they did change. I’m very proud of that.”

But a Pride march composed of enthusiastic members of a retirement community? “It would never happen a generation ago, no,” he said.

The marchers on Monday included Rochelle Schwab, 80, who wore rainbow earrings and a large PFLAG button.

Her daughter, who is in her 50s, is a lesbian, and Schwab said that in the past, her daughter had faced discrimination in public places, such as a restaurant where she and the woman she was with were chastised for holding hands.

“The manager said if they didn’t stop, they’d have to leave the restaurant,” said Schwab, a writer who lives in Alexandria and joined the march as a member of Goodwin House at Home, the facility’s program that provides services to people living off the premises.

By 11 a.m., the bus had returned to Goodwin House and the comfort of air conditioning.

Pat and Fred Gottemoeller, new residents there who are both 80, stopped in the hall to consider why they had never before participated in a Pride march, despite Pat’s having a brother who is gay.

Part of it was having jobs or travel plans that kept them busy. But Pat Gottemoeller also credited younger generations for bringing up a topic that had previously remained largely unspoken about.

“We’re just so grateful that the moment has come, and particularly I think the youth of America have accepted the diversity and helped propel things along in an appropriate way,” she said.

Thinking of her brother, she added: “We know that he had a very hard time. But we were not aware of his hard time.”

This article was originally published in LMTonline on June 21, 2021. 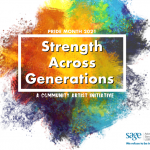