SAGE launched HAPAC to fill the need for a sustained advocacy effort to ensure that policymakers understand the intersection between aging and HIV/AIDS – especially its disproportionate impact on marginalized communities. With LGBTQ+ people of color being among the sub-populations that experience the highest rates of HIV, HAPAC will prioritize educating about this discrepancy, spotlighting how systemic racism has shaped who is most impacted by the AIDS epidemic, and advocating for policies dismantle racism by explicitly addressing the needs of these underserved communities.

Additionally, because so many survivors of the disease never dreamed they would live this long, the aging network and array of HIV and LGBTQ+-focused providers have, likewise, not sufficiently planned for the aging of the disease. Many policymakers and health care providers continue to view HIV/AIDS and aging as disparate issues, even though more than 50% of people living with HIV in the U.S. are aged 50 and older. HAPAC will work to educate policymakers at the federal level and in states across the nation, encouraging them to enact policies and fund programs in support of long-term survivors and older people living with HIV.

Get to know the long-term survivors, HIV and aging advocacy organizations, and community and grassroots based organizations that make up SAGE’s HIV & Aging Policy Action Coalition

What is Old & Bold: Services for all? 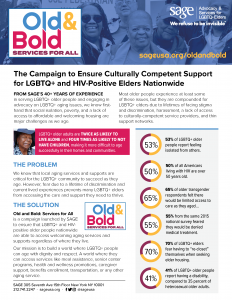 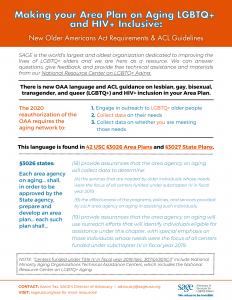 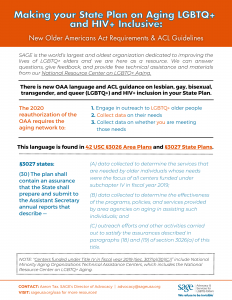 Health Needs Assessment of the LGBTQ++ Community, Aged 50+, Living with… 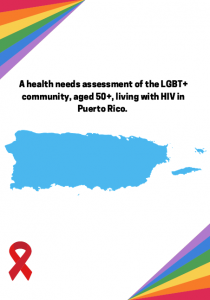