Equality Is Not a Cakewalk for LGBTQ+ Elders

SAGE’s Director of Advocacy, Aaron Tax, and Dr. Imani Woody—LGBTQ+ activist and founder of Mary’s House, the first LGTBQ senior housing development in Washington, D.C.—spoke at the ACLU’s rally on the Supreme Court steps before opening arguments for the Masterpiece Cakeshop v. Colorado on December 5, 2017. Below are their remarks.

Equality Is Not a Cakewalk for LGBTQ+ Elders 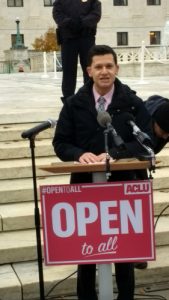 Good morning! I’m Aaron Tax, the Director of Advocacy at SAGE. We are the nation’s largest and oldest advocacy and services organization for LGBTQ+ older adults.

Why are we here today? It’s because the opportunity for LGBTQ+ older adults to grow old with the dignity and support they need and deserve is fundamentally at risk in this case.

When LGBTQ+ older adults get a meal at a senior center, enter long-term care, or seek funeral arrangements for a loved one, make no mistake, none of those institutions are making a statement about LGBTQ+ people.

Why? Because these institutions are open to the public. And they and their employees are simply serving the public.

We all agree businesses can make decisions about what kinds of products or services they provide—but they cannot pick and choose whom they serve. A senior center can choose to open its doors to seniors, it can offer canasta or bingo, or, let’s hope, something much more interesting. But it can’t decide to serve only people of certain religions or races, or specific sexual orientations or gender identities, but not others.

If we allow businesses to exempt themselves from laws barring discrimination, we’d return to a time when businesses open to the public engaged in outright discrimination against people for all sorts of reasons.

We, as a nation, decided to close that chapter of our history, which is why we have laws that ensure businesses don’t discriminate among customers based on who they are.

At SAGE, we know that LGBTQ+ older adults can’t afford to go back to a time when businesses, aging providers, and others, could display a sign in their window saying, “LGBTQ+ elders not served here.” That’s not the society we want to live in. And perhaps more importantly, our Constitution doesn’t protect that kind of discrimination. Thank you.

This case is a personal one to me, because we all know that it goes beyond cake and wedding planners. My ability to go to a restaurant, catch a cab, go to the doctor, or even just go to the movies with my wife are threatened if people can use their religion as a license to discriminate.

In the ’60s, people used race to discriminate against my family and not allow my mother, who was deathly ill, to be treated at a hospital that was nearby. Because of this discrimination, my father drove us—his five children and his wife—to a hospital that accepted colored people. However, it was too late to save my mother; she died that night. I was 10.

And when my brother died of complications associated with AIDS, the funeral home refused to pick up his body from the hospital—this was after my father had pre-paid funeral arrangements.

So, I know firsthand the havoc discrimination can cause on families and individuals. No matter who you are—you and I, and everyone here today—has a right to equal treatment under the law.

Many LGBTQ+ older adults are not as lucky as I am. I am fortunate to have a wife and family. And I have a home. But many LGBTQ+ elders can’t be here today on the steps of the Supreme Court. Many of us don’t have family to rely on. Many can’t get to the grocery store, can’t get a meal, or can’t get to the doctor without the assistance of paid businesses. Unfortunately, many of the people and organizations we rely on as we get older are religiously affiliated.

I don’t know about you, but I know I don’t want to live my life—and I know I can’t live my life—in a world where I never know if my next meal or my next visit to the doctor might be stopped in its tracks because someone wants to use their religion as a license to discriminate against me—because I’m a woman, because I’m Black, or because I’m a lesbian.

The Constitution does not give landlords, senior centers, nursing homes, or hospitals the right to put a sign outside that says “Straight people only.” That’s not my country. And I know that most of us don’t want to live in an America like that either.

By being here today, I’m giving voice to other LGBTQ+/SGL elders who share their plight and can’t be here today. And I’m asking the Supreme Court to do the right thing and not turn the clock back to the time of earlier legal discrimination, where children lost their mother, a father lost consideration for a burial, and where people lose their quality of life because discrimination is again legalized. Thank you.