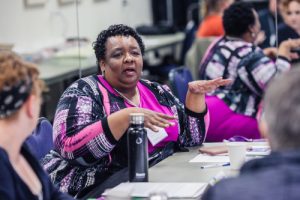 Five years ago, Pat Baldwin walked into the office of the executive director at the Hannan Foundation, an organization dedicated to preserving the dignity of elders in the state of Michigan, and took a seat. Pat, who is the director of the Hannan Center for Lifelong Learning, wanted to speak with the foundation’s director about an issue close to her heart—an issue for which she knew Hannan was uniquely suited to make a difference.

Having worked with older adults and the aging population at Hannan for the past 17 years, Pat recalls that she had seen an increase in troubling situations where LGBTQ+ people faced rampant discrimination or, more often, experienced almost complete invisibility.

“In the Detroit area, I knew that in senior centers and places where seniors go for programming, there wasn’t really any mention at all of LGBTQ+ elders,” Pat says. “I wanted to change that. I wanted to concentrate on being inclusive to the elders in the LGBTQ+ community.”

The Hannan Foundation, which has a long history as an innovative, trailblazing leader committed to the needs of LGBTQ+ older adults, saw the gap in the Detroit area and set to work on filling it.

“At the board level, we started with something as simple as changing the language in our publications to be as inclusive as possible to LGBTQ+ people,” Pat explains. “We started including language that we were ‘open and affirming,’ and we took the time to tell our participants what this all means. We changed HR information, made sure we as an organization took a proactive stance for LGBTQ+ people in our non-discrimination policy, provided diversity and inclusion training, and worked to be sure LGBTQ+ elders were comfortable.”

This attention can help a person recognize their own self-worth and feel a sense of belonging to a community, Pat explains. And while many LGBTQ+ young people have been embraced and supported by friends and family members, LGBTQ+ elders grew up in a different generation where they may have lacked a support system, experienced financial disparities, or feared reprisal if they came out as LGBTQ+.

“I’ve had LGBTQ+ people tell me that they feel very comfortable here, and that makes me feel good,” Pat says. “I want to be sure everyone is cared for.”

Pushing for Non-Discrimination Protections at the Local Level

Even though advocates like Pat have been stepping up for their communities across the nation, the reality is that in Michigan, just like in 31 other states, LGBTQ+ people are not fully and explicitly protected from discrimination.

“I was appalled to know that here in Michigan, the Elliott-Larsen Act did not cover the civil rights of people in the LGBTQ+ community,” Pat says. As a lifelong resident of Detroit, Pat says it’s important to her that this situation change. She’s proud of her city and her state, and she wants to ensure that no one fears discrimination in their local community.

Pat credits an attorney friend with introducing her to some of the challenges LGBTQ+ elders endure because of the scarcity of non-discrimination laws. “She was the spark that lit my fire,” Pat says about her friend, recalling an anecdote about a transgender person whose guardianship was granted to someone who did not support their gender identity and subsequently saw their hormones withheld and gender-affirming medical care held hostage.

“Some of these stories made me think about how that would feel—how personnel and staff treat people sometimes, and how we could do better,” she says. “Then I started being more cognizant, aware, and intentional about wanting to be a better advocate.”

Pat has been an advocate for LGBTQ+ people in Michigan for many years, most prominently as a board member of SAGE Metro-Detroit. SAGE is the nation’s largest and oldest organization dedicated to improving the lives of LGBTQ+ elders, and Pat says she is thrilled to help it make a positive impact.

Today, part of that work is focused on securing inclusive protections for the LGBTQ+ community in Michigan, whether it’s creating an equitable workplace, finding welcoming housing, or seeking business services.

“It would be monumental if the Elliott-Larsen Act were amended to prohibit discrimination based on LGBTQ+ identity,” Pat says, although she adds that enforcing the law involves its own set of challenges. Increasing public support and educating more Michiganders about LGBTQ+ people and the discrimination they face is a central need. “But if we passed the law, it would show that we’re a very forward-thinking state and that we have recognized that this is the right thing to do. It should have been done a long time ago.”

Pat is an ally of the LGBTQ+ community who identifies as straight, is married to a man, and has four children and five grandchildren. What’s more, she recognizes the importance of non-LGBTQ+ people standing up and speaking out in favor of equal treatment.

She recalls one story that illustrates the importance of treating everyone equally. When Pat was younger, her cousin began transitioning from male to female, and at one point, they sat Pat and her mother down to announce the news.

“My mom was very nonchalant about it all, and after my cousin talked and said what she needed, my mom said, ‘I love you. I want you to be happy, whatever that is.’ I really appreciated that,” Pat says. “For her to say that was good at the time, of course, but it was also important for me to hear that. It was nice to see that my mom was happy that my cousin was happy to be the person that they’re meant to be. That set a good example for me.”

Pat also says she finds strength in her faith. “I know that the Jesus I serve is one who loves everyone for who they are,” she says. Pat recognizes that the official policies of some religious officials contradict that view, but she sees a change in the future. “The bottom line is that people from the LGBTQ+ community should be able to be their authentic selves,” she says. “You have to just stay true to what you know.” —Adam Polaski, Freedom for All Americans