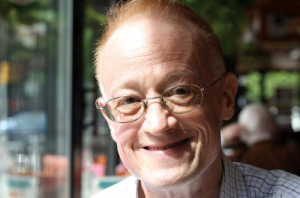 Jay Kallio gained nationwide visibility in 2012 when he shared his story about navigating the healthcare system as a transgender man living with breast cancer. Now in the midst of a new battle, Jay talks about how a younger community of activists has connected him to newfound strength and courage.

Timothy Wroten: Earlier this year, you were diagnosed with a new condition: terminal lung cancer. Many of us would have given up. Where were you at this point?

Jay Kallio: Most terminal cancer patients go through a process called “purging” where they start giving away their possessions. I found myself doing the same thing through the “Queer Exchange” Facebook group. When folks came to pick up my castaways, I brought them downstairs because I was ashamed of my apartment’s terrible condition. I live in pub•lic housing, which entails a lot of delayed re•pairs and maintenance. I didn’t have money to do repairs myself like I used to. One of the people, Ella Grasch, was concerned and questioned me in detail about the apartment. I described how the bathroom ceiling was going to fall, that lights were out, fixtures had short-circuited, and that the plumbing was backed up—numerous problems.

TW: How did Ella and other young activists you met through Queer Exchange help you get what you needed?

JK: Despite being trained in activism, I was too sick to advocate for my own needs. They got to work and generated networks, resources, and money. Ella knew a wonderful woman named Brianne Huntsman who set up a fundraising campaign on GoFundMe. She works in social media marketing, so she had the skills to do it right. They raised money to repair my apartment and also to pay for some healthcare costs not covered by Medicare. People started to send in money, $10, $50, $100, $500…it was an enormous help. I couldn’t manage navigating the bureaucracy of my housing authority, either. I was overwhelmed by the bare minimum I needed to do to survive. Several young people be•came involved: social workers, someone who works in the mayor’s office, and others. They started making phone calls for me, knowing whom to call and how to get things done. My plumbing problems were soon taken care of. Slowly, many things improved.

TW: You said that meeting younger activists from around the country through Queer Exchange and GoFundMe fueled you to generate yet another bout of activist energy. Tell us about the campaign they helped you fight against your insurance company.

JK: My insurance company refused to cover an experimental cancer treatment—immunotherapy—because it cost too much. It was my only hope for remission. A number of younger activists got involved with my own organizing efforts. First, they joined me at this summer’s Pride March. It was amazing to see the older gener•ation of “ACT-UPers” pushing me in a wheelchair, alongside younger LGBT and health care advocates. Taking the money raised, we planned a rally in front of the insurance company. We videotaped it so we could do an online campaign. We used so many different campaign tactics including street theater, online petitions, and a Twitter war against the insurance HMO. We contacted politicians’ offices, which also added pressure. As we started the rally, one of the executives of the insurance company came to us and said, “Have you talked to your doctor yet this morning?” My doctor had already been e-mailed with an approval for my immunotherapy treatment. They had done a 180 on a life-saving treatment that had previously been denied. It’s because younger activists got involved and gave me a big shot in the arm that I can fight for myself again.

TW: In spite of this battle and other health concerns, your rebel heart still beats strong. How have you helped SAGE and other communities fight for better care and equity?

JK: I have worked with SAGE a lot on LGBT cultural competency and healthcare. I am writing chapters for a guidebook to help healthcare professionals better understand the needs of LGBT cancer patients. I have also presented at a few conferences to advance palliative care funding. I’m getting an awful lot done that will not only help LGBT cancer patients, but also Medicaid recipients and cancer patients across the board.

TW: How can young people join in this fight?

JK: After meeting so many young LGBT activists this year, I’ve said, “If you liked doing this with me, why don’t you consider volunteering with SAGE? We need your help. Beyond pushing us in the wheelchair at the next march, we need you to work with us on advocacy!” The fight goes beyond about being gay. It’s about supporting anyone who may be gay and vulnerable, which includes those who are also young, old, of color, or poor. We need cross-generational community and support for years to come. With our mutual vulnerability, we also share strengths to remedy that vulnerability. Activism works. Get involved.

Read about Jay Kallio and other LGBT trailblazers in the Fall 2015 issue of SAGEMatters. May is Older Americans Month. Connect on social media with #OAM16.