Home is a place where there should be no need to hide. Yet many LGBT older people struggle to find housing situations that are both affordable and accepting of residents’ sexual orientations and gender identities. Amidst the critical need for accessible, compassionate and LGBT age-friendly homes, John C. Anderson Apartments (JCAA) in Philadelphia stands out as a model community. A diverse cast of LGBT pioneers calls this place home, thanks to the unflagging support of donors, funders, government officials, and residents themselves. That is why SAGE decided to honor John C. Anderson Apartments with the annual SAGE Advocacy Award for Excellence in Leadership on Aging at the 2017 Creating Change Conference. 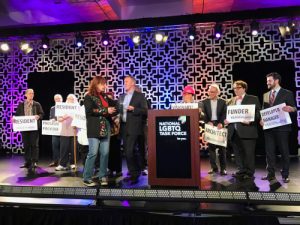 On Sunday, Jan 22nd, SAGE CEO Michael Adams presented the SAGE Award to Elizabeth Coffee-Williams, retired transgender film star and resident of the JCAA. Onstage with them stood the community of players who made the LGBT-friendly housing complex a reality. Participants included those who conceived of, built and managed the project, (Mark Segal, Dr. Magnus Hirschfeld Fund, Wallace Roberts & Todd, LLC, and Pennrose Management Inc); the donors, funders and government officials who provided support; the William Way LGBT Community Center, which provides programs and services; and the residents.

Many of the residents were outspoken activists who helped launch the gay rights movement. In their older years, they continueto channel their lively spirits into an active community that serves as a role model for the rest of the country. In an era where many of the hard-won rights our LGBT pioneers fought to secure are under attack, John C. Anderson Apartments offers a resounding example of how local community efforts and dedicated cross-collaborations can create safe spaces for LGBT elders to thrive.