Starting mid-January, SAGE’s program staff is delighted to offer an innovative new program: Energy, Power & Joy in Somatic Meditation for Trans People. We had the opportunity to sit down with Diana Goetsch, the facilitator of this somatic meditation program, to learn more. 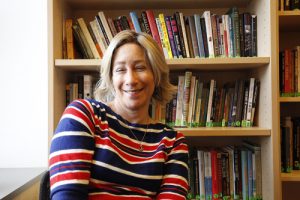 A life-long learner, teacher, writer, accomplished poet, Tai-chi and yoga practitioner, Diana Goetsch is also the facilitator of SAGE’s groundbreaking new meditation program for older trans people. Goetsch began meditation in 1982 as a university student and was immediately struck by its effects, even before she began to truly deepen her practice. “This practice gave me my life.” Exuding a soothing serenity, Goetsch sat with me to talk about practicing with community, trusting the body, older and younger trans folks, and the potential life-changing benefits of somatic meditation.

So what exactly is somatic meditation?

Wow. How is it different from normal meditation?

Somatic meditation has more emphasis on relaxation and on trusting the body as a wisdom figure. Most meditation that I see places the emphasis on concentration. And it’s mental – in the head. This can be helpful for some people. But in somatic meditation, the only transformation that happens is initiated below the neck, in the body. The body is taken as the teacher. And normally people don’t listen to our bodies. We’re extremely cruel to our bodies. We overfeed them. We underfeed them. We give them drugs. We get them drunk. We use our bodies for our entertainment. And trans people call their bodies wrong. They say, “I’m in the wrong body.” Somatic meditation not only makes the body an ally- it does more. It hands over the car keys, frankly. I think that’s the biggest difference, with somatic meditation.

Is there a difference between practicing alone and in a group?

I think there is, but both are essential. The group practice is very helpful though, especially amongst trans folks, for that feeling of shared energy and understanding. And if you are new, the experience of guidance is a great benefit in helping to stay with the practice and experience its benefits. However, practicing alone helps us lock in and go further on the path. And I think some of the openings and insights that we gain alone are maybe the most profound. But I think we need both. A friend of mine calls it “communion and community”. The communion is that very personal, very unique and individual engagement with a practice. Community is that everyone is essential.

What do you think about the SAGE community?

I think visiting SAGE and visiting this hub of life is always a pleasure. It’s very full of life, this place. What I see are deeply engaged people who are extremely savvy with geriatric issues. There’s a lot of respect, a lot of dedication. It’s only been a couple months, but I’m so impressed by what I see. Maybe more than anything, there’s an energy and spirit about this building. When I see people having dinner together, it’s very different from the people my grandfather lived with at the end of his life, in a residence somewhere in Florida. Waiting to die, frankly. These people are not waiting to die. This is a very vibrant place, and I think they feel cared about. That’s the sense I get anyway.

What do you think is the relationship between older and younger people?

The whole emphasis is on young people in America. It’s always been this way. And having been a close friend of my grandfather who lived to be 91, I watched him and other older folks in residences be shoved aside. To me these people were resources for younger people, and vice versa. Older folks derive tremendous amount of energy and validation by mixing with young people, especially kids. I’m beginning now to work with the young end of the spectrum and the older trans folks. Maybe there’s a way to get them talking to each other because I think there’s a lot of benefit.

Having worked with both, what things do you notice between the younger and the older generations of trans folks?

Is there anything you’re looking forward to in teaching this class?

I think just the people who show up and what they bring to the table. The discoveries that they will bring to me and to the rest of us. One thing about somatic meditation is that there are guidelines that are thousands of years old. It’s just put into American English in an available way. There are guidelines, familiar markers along the way, things I can see and help people with. But ultimately it is always an inner journey. And what people discover through their bodies with embodied practice, they bring back to me and everybody else. So I’m interested in whoever shows up and what they bring back. And they might make discoveries that I’ve never heard about, so I’m very excited.

Final Question: What was it like when you first started meditation?

It was a Zen practice. I was learning in college. Most of it was book instruction; it was not very deep teaching. But I think something took deeper root about ten years ago with my teacher Reggie. This practice basically gave me my life. And this practice put me on the path to coming out to myself, if you really want to know. 7 years of doing this and I basically realized, you know what, I’m trans. And I have to live in this way. It was meditation that gave me this. I had my coming out, so to speak, to myself, at a cabin alone for 12 days at 10,000 feet in Colorado doing this practice. How do you like that? It’s true. Every word is true. Once you see it in the body, once you listen, once you surrender, and the body puts you on notice, you can’t un-see it.