Tanya Testifies to the Committee on Financial Services

On Tuesday, November 9, 2021, Tanya Asapansa-Johnson Walker, Co-founder, New York Transgender Advocacy Group and SAGE’s Transgender Women’s Support Group Facilitator, spoke at a special House Finance Subcommittee meeting. There’s No Pride in Prejudice: Eliminating Barriers to Full Economic Inclusion for the LGBTQ+ Community offered the subcommittee members the opportunity to hear Tanya’s story and the impact of discrimination on her emotional, physical, and financial well-being. We highlight Tanya’s testimony on this Trans Awareness Week to shine a line on the intersectional issues that affect the TGNCB community. Watch Tanya at the hearing and read her testimony below.

HEARING ON “THERE’S NO PRIDE IN PREJUDICE: ELIMINATING BARRIERS TO FULL ECONOMIC INCLUSION FOR THE LGBTQ COMMUNITY”

Members of the Committee, thank you for holding this hearing on an issue that I believe impacts the entire lesbian, gay, bisexual, transgender, queer/questioning (LGBTQ+) community, but especially affects those who are transgender, gender non-conforming, and non-binary (TGNCNB).

My name is Tanya Asapansa-Johnson Walker and I am a proud, Black, transgender woman. I am HIV-positive. I am also a U.S. Army Veteran and a co-founder of the New York Transgender Advocacy Group, known as NYTAG. I have also worked on behalf of SAGE, the world’s largest and oldest organization dedicated to LGBTQ+ elders, and Housing Works, an organization dedicated to ending the dual crisis of homelessness and AIDS. I have been an LGBTQ rights advocate for more than 27 years and have been focused on fighting for TGNCNB (transgender, gender nonconforming and non-binary) rights—and for myself to be treated with basic human dignity and respect—for 18 years.

I am here to share my story in hopes that it can help people begin to understand the issues that I have faced and the larger issues that exist within the LGBTQ+ community, especially around housing and economic security. I thank members of the committee for hosting this hearing and giving me the opportunity to speak. My path has not been an easy one. Despite suffering harassment and abuse – verbally, physically and sexually – in the Army, I received an honorable discharge in 1984.

I then went on to study social work at the College of Staten Island (CSI) where I was constantly misgendered. My professors wouldn’t use my name, no matter how many times I asked them to do so. I was forced to leave the school abruptly due my activism for LGBTQ rights. I was the leader of the Lesbian Gay group at CSI. I protested for an out Lesbian Judge, Judge Karen Burstein and against the comments made by the Borough President Guy V. Molinari.

The discrimination and threats of violence began shortly after. The students started to threaten and harass me, because of my perceived sexuality and gender identity. Despite my reporting these threats to the school’s administration and to City law enforcement, the threats were ignored.

In 1988, I was severely injured in a car accident, which served as a catalyst for me to come to terms with my identity as a woman, and I decided that life is too short for me to live unauthentically. I tried to find medical care to assist with my transition, but was turned away, laughed at, and at times declared mentally ill. One doctor called me a schizophrenic and prescribed pills for my “condition.”

From 1990 through 2010, it was virtually impossible to find doctors or other medical providers who did not overtly reject, minimize, and, at times, even ridicule and mock my identity as a transgender woman. I have been laughed at, told I was just a gay man who didn’t know how to be a man, misgendered, deadnamed (that’s when someone calls you by your birth name after you’ve changed your name when transitioning), and on the extreme side of things, had my genitals exposed and mocked by healthcare staff. I learned to take a friend with me to document these cases of discrimination.

This impacted my life greatly, not only with healthcare, but with my ability to find work and safe housing. Many of my friends and I were unable to find employment because people would not hire transgender folks. Despite being a Combat Engineer Veteran, I was forced to rely on food pantries and kitchens throughout my adult life because I could not find work. In order to pay my rent and purchase hormones (off the street because no medical provider would help me), I resorted to survival sex work. I know many other transgender individuals that also turned to survival sex work just to pay for their health care needs. I believe having to share syringes with other trans women and utilizing street hormones helped to cause my HIVpositive status.

Despite the misgendering, the lack of healthcare, the lack of employment, the lack of housing, the lack of funds – I survived. After completing a job training program, I found a job in 1999 as a community follow-up worker. I worked to locate housing, medical, and mental healthcare treatment for single adults and families who were homeless, HIV positive and addicted to substances, and then as a case manager at Housing Works. My work as a case manager involved assisting TGNCNB clients with a variety of needs, including accompanying them to medical appointments to act as a literal human shield and advocate against the mistreatment and disrespect that is almost always guaranteed.

The connection between health and economic security is a vicious circle – poor health can impact finances, low or no finances can impact mental health, and the circle goes around and around. I’ve seen this not only in my community, and the people who are impacted at Housing Works, but also older LGBTQ+ people from my work at SAGE.

Health and finances also impact one’s ability to find affordable, safe housing. I myself have been laughed at, turned away, harassed and discriminated against when seeking housing. I have heard horror stories, both through my work at Housing Works, but also through my TGNC friends, about placement in the shelter system when affordable housing cannot be found. Transgender women either get physically and verbally abused when placed in female shelters — being told they are a man and do not belong; or they get physically, verbally and sexually abused when placed in male shelters. There is no safe place for TGNC people until cultural competency trainings are required, and both knowledge and attitudes change. It is horrifying, and I have been on that side of horror, to be abused simply because of who you are or whom you love.

Health, finances and housing — they are all part of a triple threat for the LGBTQ+ community. 40% of older LGBTQ+ people do not tell their doctor about their sexual orientation or gender identity. Nearly 200% of LGBTQ+ people in this country live at or below the Federal poverty line and 48% also experience some form of housing discrimination. For the transgender population, the statistics are dire: more than 1 in 4 transgender people have lost a job due to bias and more than three-fourths have experienced some form of workplace discrimination.

Transgender people of color experience even higher rates of discrimination – which can include harassment, refusal to hire, physical and sexual violence and privacy violations. These extreme situations lead to high levels of unemployment and poverty. It is believed that 1 in 8 transgender people become involved in underground economies—such as survival sex and drug work—in order to stay alive.

This must stop. We are your neighbors, we are your sisters, we are your friends, we are Americans. There are direct improvements that can be made at the Federal level to improve the lives of LGB and especially TGNC people.

For starters, making the Equality Act the law of the land is crucial in protecting the LGBTQ+ community. Currently 29 states do not have comprehensive protections for LGBTQ+ people. The Equality Act would put explicit federal protections in place to protect me and my transgender brothers and sisters from discrimination in housing, employment, access to credit, and more. I know it won’t solve all of our problems, but it will help ensure that we are treated the same as everyone else.

Federal agencies, including the Consumer Finance Protection Bureau (CFPB) and the U.S. Department of Housing and Urban Development (HUD) could also do more to ensure that LGBTQ+ people – including LGBTQ+ older people – have access to safe and welcoming housing. While I can’t claim to be a policy expert, here are some commonsense ideas for the (CFPB) and HUD to undertake:

And most importantly, for Congress, the Equality Act must be passed so that nondiscrimination protections become the law of the land. When we all are treated with the respect and dignity we deserve, we are all able to thrive.

I thank you all again for your time and look forward to seeing what progress can be made both now, and in the future. 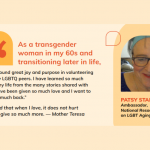 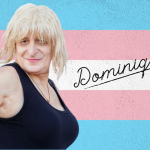