During Black History Month, Mary’s House for Older Adults, SAGE Metro DC, and AARP DC held a LGBTQ/SGL (same gender-loving) State of the Union. One of the issues brought to the forefront was the increase of suicides among LGBTQ elders in nursing homes and other facilities. Surprised?

While we’re all sort of aware that suicide is a leading cause of death for youth aged 10 to 24, we rarely think of it as a leading cause for elders. However, the National Council on Aging (NCOA) has a startling statistic: people 45-64 years old had the highest suicide rate in 2013, and elders 85 years old and older had the second highest. The NCOA suggests these stats may be higher because elder suicide may be under-reported by 40% or more and they include the double suicides involving spouses or partners that occur most frequently among older people. 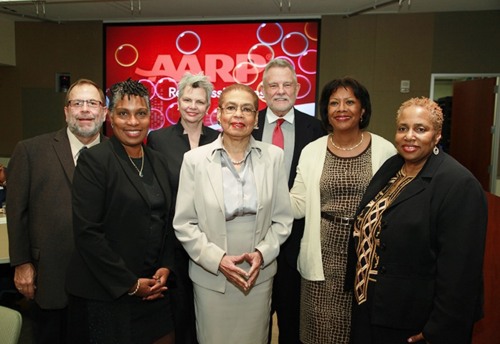 The Centers for Disease Control (CDC) estimates that 10,189 people 60 years old and older died from suicide in 2013, and those elders 85 years old or older committed suicide at a rate four times higher than the nation’s average.

We can work to change these statistics.

Bette Davis said “Old age ain’t for sissies,” and she wasn’t talking about LGBTQ/SGL folks necessarily. However, being old and LGBTQ/SGL is HARD. It is so hard that the research is showing that a large majority of older gay folks are going back into the closet. Anecdotally, we are finding their numbers climbing in the suicide rates. One expert stated that a person “thinking about suicide may not want to die but is in search of some way to make pain or suffering go away.”

So, what do we know? We know that ageism coupled with homophobia and the maltreatments of racism, classism, sexism, ableism, and heteronormative standards can lead to isolation and depression. We also know that the realities of living alone; not having a partner or spouse; leaving one’s home; and becoming dependent on systems and people can bring about a sense of loss and grief so great that suicide seems the only answer. We can change the environments that cause our elders to run back into the closet for safety or commit suicide.

The keys to changing those statistics mentioned earlier are in our hands. We must transform the nature of an “assisted living” facility to “we care living” facility. The panelists and attendees at the State of the Union had several recommendations for organizations, including:Back in the day, nursing homes were called “old folks homes.” The term of art is now “assisted living facility,” but the atmosphere is the same – and nobody wants to be in one. But what if? What if an assisted living facility was truly a place that assisted in one’s quality of life, not set up like a hospital but like one’s home? What if the staff looked less like medical personnel and more like neighbors? What if the caregivers and the patients were educated to work and live in a culturally competent manner, respectful and accepting of race, ethnicity, class, gender identity, and sexual orientation, and there was a zero-tolerance policy for anything less? What if the expectation was to CARE and everyone in the facility felt safe and supported? Far-fetched? I think not.