Dreaming At Any Age

by Marsha Aizumi. This article originally appeared in the Pacific Citizen.

Almost five years ago I retired from a 13-year job that I loved. It was time. And it was also frightening. Work gave me purpose and a place to belong. Would I find that same fulfillment now as a retired person? I had decided to write a book about my journey with my transgender son and also I seemed to be moving in the direction of becoming something I knew nothing about: an LGBTQ activist. Sometimes you just have to follow your heart and take a leap of faith. So that is what I did.

During these past five years, I have learned that my greatest power lies in being myself. I have also learned that age puts no limitations on what you can do. Everything is a choice. For the first part of my life, I really didn’t know what being myself was. I was a perfectionist, because I never wanted to be wrong. And if I was perfect, nobody would criticize me. But often being perfect and expecting perfection from others gave neither of us room to grow and make mistakes. And it also put a tremendous amount of pressure on me. I didn’t risk taking on anything where I could fail and so I never took on things that could expand who I was as a person.

I was often afraid to speak out for fear of offending others and having them judge me as a terrible employee, mother or human being. At work, my bosses would encourage me to share my thoughts and not be so invisible. I tried to be visible, but at the first hint of disapproval I would quietly move into invisibility once again. Not being seen seemed safer. 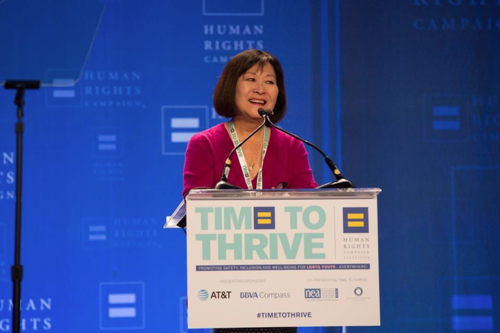 Marsha speaking at the HRC Time to Thrive Conference in February 2016. Photo by Steph Grant Photography.

And then Aiden, my son, came out as transgender and my world was turned upside down. Something inside of me changed. I could no longer think about myself; I needed to think about him. No longer could I go through life casually seeing how every day would unfold for me. No, I had to make each day count. I had to courageously step out, most of the time being scared of saying or doing the wrong thing, but doing it anyway. Brene Brown, author of #1 New York Times bestseller Daring Greatly says, “You can be brave and scared at the same time.” Most of the time, you didn’t have to tell me I was scared. I felt that inside. But brave was a whole new concept. If I was scared and I did it anyway, that was brave?

In the beginning I made a lot of mistakes. I said the wrong thing, but I learned the power of saying “I’m sorry.” I did wrong things and learned the power of asking, “How can I do it better next time?” Sometimes people did or said hurtful things to me. And I learned the power of saying, “I know you didn’t mean to hurt me, but when you said that about my son, my heart felt bad.” In most cases, I was forgiven, or given better ways to handle things or was apologized to. In all cases, I walked away understanding more, feeling prouder of myself or realizing how I could do things better in the future. The hard part of apologizing, asking how I could do better or sharing my feelings was that most of the time, I felt like a lobster without a shell. Later I found out that was how you feel when you are being vulnerable.