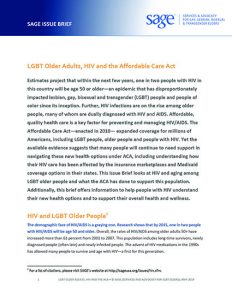 The demographic face of HIV/AIDS is a graying one. Research shows that by 2015, one in two people with HIV/AIDS will be age 50 or older. Overall, the rates of HIV/AIDS among older adults 50+ have increased more than 61 percent from 2001 to 2007. This population includes long-term survivors, newly diagnosed people (often late) and newly infected people. The advent of HIV medications in the 1990s has allowed many people to survive and age with HIV—a first for this generation.