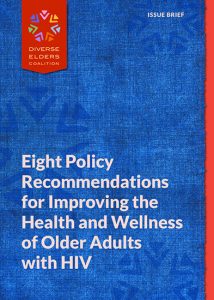 From the first known cases of the HIV/AIDS epidemic in 1981 until the mid-1990s, most people diagnosed with HIV faced death within a few years, if not sooner. Yet with the advent of effective anti-retroviral treatments—and because of the extraordinary contributions of courageous advocates, scientists and clinicians—HIV has become a more manageable chronic illness, as evidenced by the increasing numbers of older people living and aging with HIV. Research estimates predict that 50 percent of people with HIV in the U.S. will be age 50 and older by 2015—and by 2020, more than 70 percent of Americans with HIV are expected to be age 50 and older.