by Harry Breaux, a member of the San Francisco AIDS Foundation‘s Elizabeth Taylor 50+ Network. Harry turned 71 on March 21, 2016. He is one of the long-term survivors of HIV/AIDS featured in the documentary “Last Men Standing.” 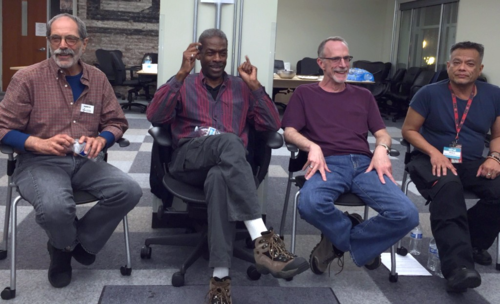 Recently I found myself upset with a friend and realized how small my life had become. Years ago, I was educated to be a successful something-or-other, and I tried for years to accomplish that very goal. However, once I graduated from the military school to which my parents sent me at age 12 due to my budding homosexuality, I found life to be very different than I expected. The doors that would normally open to help, were suddenly closed due to my “sexual orientation.”

There were years of shame, hiding, repressing my feelings and generally trying to be someone or something I was not. The ’70s were, in theory, the perfect time to reach out and speak out and “find myself.” It wasn’t that black and white, though.

When I was born in 1945, I was illegal. Not illegitimate, that’s a different game altogether. Homosexuality was listed as a disease until 1973 (I was 28) when the American Psychiatric Association declassified homosexuality as a disease. I was born homosexual. It was not a choice I made. I remember always being attracted to the male rather than the female. Maybe it was all those manly cowboys I saw at the movies on Saturday afternoon. I could never remember who the woman was, but I knew all the cowboys. My natural, God-given desire and emotional attraction were not heterosexual.

Coming to San Francisco in the early 1970s was a wonderland of freedom. Sexual freedom for homosexuals was a hot topic. We found ourselves expressing connection with each other in ways that were heightened by the unusual times of the “hippie era.” When Harvey Milk was elected and then assassinated nine months later, it became a double duty to assess the damage and try to re-assemble the momentum that had built up to those historic years. Mobilization was occurring at many levels to keep the community together, vibrant, and on track to establish basic human rights for our group.

Then AIDS began to show up. First, it was confusing, then saddening, then frightening. Daily reminders of the devastation met us on every block; gaunt friends, barely able to walk any longer were seen all around us. Friends, who just a few days, weeks or months before had appeared healthy, were no disappearing at an accelerated pace. During the next several years, the time moved as if we were all caught in a slow motion movie. Obituaries took up four, five, or more pages in the Bay Area Reporter each week.

After joining Shanti emotional support training in 1984 or so, after hearing of a friend’s death, and volunteering as a counselor for a couple of years, I began to feel a quickening in my own body that could not be ignored. Fear called me to take a break and I retired to the Big Sur coast for nine months. I had been HIV+ since 1980. By 1996, after being what was termed “a slow progressor,” I basically collapsed two days after arriving in San Jose for a Christmas visit with friends. I spent three weeks in the hospital: MAC, PP, Cryptococcal Meningitis. The first week, I was given a 50/50 chance to survive. After that, the drugs began to work and I was eventually released.

At the time of my release, January 1997, the cocktail had been out probably no more than 6 months. I was lucky. It stopped the virus in me from replicating and I’ve been virally undetectable ever since. After spending a couple of weeks on my friend’s couch and being taken care of, I was up and on the way to the health I experience today.

There is no easy path to this place. It’s been a touch and go, hope and fear process throughout. I applaud the attitudes of today that have evolved. Having a country turn its back on me was never a betrayal that I could understand. We still have a long way to go to meet the challenges of today’s world.

What was accomplished in San Francisco or New York, Atlanta, Los Angeles, was nothing less than a major breakthrough for the persons of a different sexual orientation. May this inclusion of a diverse population into the mainstream of society never cease. I applaud all who are living with terminal diseases. It disrupts a life in a way no one can understand unless they experience it. Those around us who are not going through this also need acknowledgment for the stress and love they are called to give. No one signs up for these things, but they definitely happen.

Peace-filled energy to all of us.