Now more than ever, decision underscores need to fully dismantle both legal and cultural systems of racism.

[New York, NY] — Today, in a historic victory in the struggle for LGBT equality, the Supreme Court ruled that lesbian, gay, bisexual and transgender (LGBT) people have the freedom to work and earn a living without fear of discrimination based on their sexual orientation and gender identity.  During a time when the LGBT community is commemorating the first Pride marches held 50 years ago and celebrating LGBT pioneers of color who led the protests against police violence at Stonewall in 1969, SAGE is elated by the Supreme Court’s decision.  For LGBT elders, the outcome of these cases is critical. Without workplace protections, LGBT people have been subjected to discrimination that has accumulated throughout their lifetimes, often leading to poverty and other challenges in later years.  With follow up advocacy, this ruling by the Supreme Court can have far-reaching and profound implications for LGBT older people, including by extending the Court’s rationale to pending and future cases related to treatment of LGBT elders in housing, care and beyond.

While the world faces a historic pandemic, as recently as Friday, the Trump administration finalized a rule that aims to undercut non-discrimination protections for LGBT people in healthcare. This effort by the Trump administration – to take away healthcare from LGBT people during a pandemic – reminds us that the fight for equality is not yet over. It provides a clarion call for Congress to act, once and for all, and pass comprehensive, federal, non-discrimination protections, to protect LGBT older people and others from discrimination in healthcare and in every facet of their lives. And it reminds us that not only are LGBT older people one of the most at-risk populations as we face COVID-19, but they are also profoundly impacted by  racial injustice  in our country.  Our work for equality for the entire LGBT community must continue until we are protected in all facets of life.

Discrimination is more than a statistic – it can devastate the later years of real people, as is evidenced by the case of Mary Walsh and Bev Nance. Together for forty years and married for ten, Friendship Village, a senior living community in St. Louis, Missouri, denied them entry because it refused to recognize their same-sex relationship. Mary and Bev filed a federal lawsuit to challenge their discriminatory treatment; their suit has been stayed  pending today’s decision, which bodes well for a positive outcome for the couple.

“The Supreme Court’s decision today is a historic victory for LGBT older people, who have been denied employment, fired, demoted, and not-promoted for their entire working lives, simply for who they are or whom they loved” said SAGE CEO Michael Adams. “We must continue our work to ensure legal protections are also extended to elder housing and care, and that black and brown elders are fully protected from discrimination. The brave people who stood up to demand liberation for all communities at Stonewall and in the years since then are now our elders, and they deserve to see these changes.” 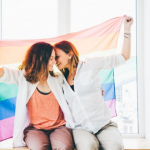 BY THE NUMBERS: BEING LGBTQ+ IN AMERICADiscrimination, In the News 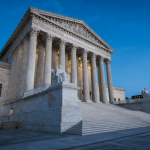