That decision, however, came on the heels of a federal announcement stripping transgender health protections from the Affordable Care Act, a move that some say could apply to long-term care providers.

“An employer who fired an individual for being homosexual or transgender fires that person for traits or actions it would not have questioned in members of a different sex,” Justice Neil Gorsuch wrote for the court. “Sex plays a necessary and undisguisable role in the decision, exactly what Title VII forbids.”

The ruling will affect LGBTQ workers across the country, because most states don’t provide protections from workplace discrimination.

“We support the LGBTQ community and any efforts to ensure a more diverse, inclusive and supportive workplace,” the American Health Care Association / National Center for Assisted Living told McKnight’s Senior Living. “This change must occur at every level, especially at the top, and we look forward to working with Congress on programs that will help recruit, retain, and attract more individuals to work in long term care and serve our residents.”

“We applaud the Supreme Court’s ruling that extends the scope of Title VII of the Civil Rights Act to protect all employees, including those who are gay and transgender,” Sloan told McKnight’s Senior Living.

Elder advocacy organization SAGE stated the outcomes of such cases is critical for LGBT elders.

“Without workplace protections, LGBT people have been subjected to discrimination that has accumulated throughout their lifetimes, often leading to poverty and other challenge in later years,” SAGE stated in a release. “With follow-up advocacy, this ruling by the Supreme Court can have far-reaching and profound implications for LGBT older people, including by extending the Court’s rationale to pending and future cases related to treatment of LGBT elders in housing, care and beyond.”

Monday’s Supreme Court ruling came on the heels of the U.S. Department of Health and Human Services announcement Friday that it had finalized a rule that revokes transgender health protections established by the Obama administration.

The final rule eliminates the definitions section of the prior rule, eliminating key terms including “on the basis of sex,” “covered entity,” “sex stereotypes” and “gender identity.” The announcement came during LGBTQ Pride Month and on the four-year anniversary of the massing shooting at a Florida gay nightclub where 49 people were killed.

Aaron Tax, SAGE director of advocacy, said HHS states the final rule applies to any health program or activity — any part of which received federal funding.

“Section 1557 of the ACA applies to any entity that receives funding through HHS; that includes any long-term care institution, nursing facility or any other facility receiving Medicare or Medicaid dollars,” Tax said.

“While the world faces a historic pandemic, as recently as Friday the Trump administration finalized a rule that aims to undercut non-discrimination protections for LGBT people in healthcare,” SAGE stated in a release, adding that the fight for equality is not over. “It provides a clarion call for Congress to act, once and for all, and pass comprehensive, federal, non-discrimination protections, to protect LGBT older people and others from discrimination in healthcare and in every facet of their lives.”

SAGE CEO Michael Adams said in the release, “Undercutting the protections that section 1557 provides will give health and long-term care providers a license to discriminate against the patients they should be serving.”

This article originally appeared in McKnight’s Senior Living on June 16, 2020. 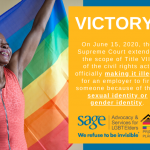 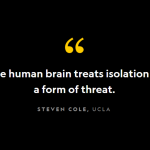 How to beat loneliness during a pandemic? LGBTQ elders lend their wisdomDiscrimination, In the News, Social Isolation, Wellness
X
X
Share
Tweet
Email