SAGE celebrated the resilient spirit of LGBTQ+ elders across the country at its annual gala.

[New York, NY] Last night, SAGE, the world’s oldest and largest organization dedicated to improving the lives of LGBTQ+ elders, hosted its 26th annual SAGE Awards & Gala. The event honored the resiliency of today’s older LGBTQ+ community, while celebrating the generous supporters who continue to fuel SAGE’s tireless advocacy and critical life-saving services. In an exciting moment during the evening, SAGE also unveiled its new strategic direction in which the organization has committed to dramatically scaling its impact for LGBTQ+ elders everywhere – with a special emphasis on those elders previously left behind.

As SAGE CEO Michael Adams declared, “SAGE’s board and staff spent the past year not only doing everything they do to make a daily difference for our community’s elders, but also huddling together to forge a bold new direction for our organization’s work that truly meets the moment – that is big enough and transformative enough to rise to the occasion and overcome this crisis so that our elders can live the lives they deserve, no matter who they are, no matter where they live, no matter what they need.”

This bold direction and spirit were embodied in the event’s award recipients, which included Justice Rosalyn Richter with the Paula Ettelbrick Community Service Award, Brent Miller of Procter & Gamble with the Jack Watters Corporate Advocate Award, Gilead Sciences with the Corporate Leadership Award, and Gloria Allen with the Joyce Warshow Lifetime Achievement Award. In addition, New York City Councilmember Crystal Hudson was a part of the night’s festivities, opening up the event with her remarks. “We know that SAGE is committed to New York’s older queer population, the very people who were at the forefront of the queer liberation movement,” said New York City Councilmember Crystal Hudson. Continued Hudson, “that is one of the very reasons I am able to stand here before you today as the first out, gay Black woman ever to be elected in New York City.” SAGE constituent and Stonewall House resident, Diedra Nottingham, declared “I am not alone. I am not invisible. And SAGE helps me get my message out into the world.   We need to support and to uplift our older community – especially Black and brown communities and the trans community.” As the recipient of the SAGE Corporate Achievement Award, Daniel P. O’Day, CEO of Gilead Sciences, heartfully shared, “And for as long as people are living and aging with HIV, we will be right here alongside SAGE and our other community partners doing everything in our power to remedy health inequities, expand access to care and improve the lives of the people we serve.” Justice Rosalyn Richter received the Paula Ettelbrick Community Service Award and reflected on her work over the years, “I could not have imagined at 19, that I would be here now at 66 – almost 50 years later, still fighting for equality and to keep the civil rights gains that we fought to achieve.” Luchina Fisher, documentary filmmaker and chosen family of Gloria “Mama G.” Allen, accepted the Joyce Warshow Lifetime Achievement Award posthumously for Mama G. Fischer announced, “I am honored to accept the Joyce Warshow Lifetime Achievement Award for activism in and for the transgender community. Thank you for this great honor for a great woman whose spirit lives on in all who loved her.” Brent Miller, Senior Director for Global LGBTQ+ Equality at Procter & Gamble received the Jack Watters Corporate Advocate Award. Miller spoke to the history of P&G evolving with LGBTQ+ rights and his own experiences. “I have spent much of my career working to connect generations within the LGBTQ community…the journey that those that came before me went through that allows me to be who I am today.” Continued Miller, “the people that SAGE supports have had an impact that cannot be overstated.”

The 26th SAGE Awards and Gala was a successful celebration and a way to show the community how SAGE is reimagining and reengineering how it does its work.  SAGE is expanding, with two new divisions focused on SAGE’s New York City services and its cutting-edge social enterprises for LGBTQ+ elders, a more diverse partnership model, and a path-breaking new SAGE Center of Excellence (CoE). Learn more sageusa.org/lookingahead.

Part of the CoE is the Equity Innovation Lab, a new microgrant program that will fund community-based initiatives and entrepreneurial projects designed to benefit particularly marginalized LGBTQ+ elder communities. The grant application is currently open, and more information can be found at sageusa.org/excellence. 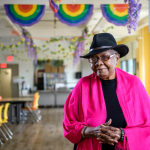 The Stonewall Generation fought for equality. Now they are fighting for their lives.Discrimination, Health Care, Housing, In the News, LGBT Aging 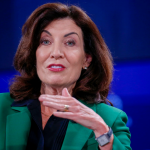