This article originally appeared in the Fall 2015 issue of SAGEMatters. 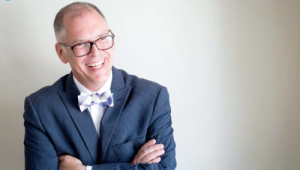 The Supreme Court validated the relationships of LGBT people across the nation in 2015 when it handed down its decision in Obergefell v. Hodges. Plaintiff Jim Obergefell took the time to speak with us about his experience in this history-making moment.

SAGE: How did you feel at the moment the Supreme Court decision came down? Can you describe it?

Jim Obergefell: When Justice Kennedy read our case number, I grabbed the hands of friends sitting on either side of me and listened intently. The first few sentences were a roller coaster of emotions, as I thought “we won”—followed closely by doubt. When it became clear that we had indeed won, I burst into tears and cried throughout the rest of his decision. I felt a mixture of sadness, joy, and satisfaction. Sadness, of course, because John wasn’t there to experience the win with me. It was impossible not to feel joy at that moment! Here was the highest court in the land saying that John and I—and couples like us—exist and are just as valid as any other couple. I also had a sense of satisfaction because I’d lived up to my promises to love, honor and protect John. It was a bittersweet day, but definitely more sweet than bitter.

SAGE: Caring for a terminally-ill partner requires profound physical and emotional strength. You’ve said that John gave you “the strength to do this.” How did family, friends and community reinforce that strength?

JO: I know I had moments when I was completely exhausted, emotionally and physically, but I always thought back to John and the fact that I was fighting for him, our marriage, and people across the country. I found that no matter how busy I was, I was energized by meeting people, talking about John, and speaking out for equality. My family and friends worried about me, but they understood how important it was, and they could also see how passionate I was about what I was doing. They also kept me grounded and sane by checking in with me and, more importantly, making time for me whenever I was home in Cincinnati. It’s impossible not to be energized when strangers stop me to say thank you, tell me stories, or share why my fight mattered to them.

SAGE: In winning a battle for you and John, you won something for all of us. Have you met any older—“SAGE age”—couples who’ve tied the knot since this summer’s Supreme Court victory? How have they inspired you?

JO: I have, and quite a few! I remember how frequently people were surprised by how long John and I were together, so I’ve loved meeting couples who have been together as long or longer. There’s been such a look of joy and contentment on their faces, and I can’t imagine a better thank you. I know how meaningful getting married was for John and me after twenty years together, so I understand a bit of how they feel. Every time a couple tells me they’ve finally married after being together for so long—or that their marriage is now recognized in all 50 states—I’m humbled to be part of that.

SAGE: In remarks following the decision, you shared your hope that the ruling would decrease LGBT stigma and discrimination. You also acknowledged the crisis in Charleston, saying we must continue to fight as “progress for some is not progress for all.” What issues do you hope to address in the coming year?

JO: Our country still hasn’t lived up to the promise of equality that’s part of our shared American identity, and my experience fighting for marriage equality has inspired me to continue being involved until we do. I’ll be working toward passage of the Equality Act to include sexual orientation and gender identity in federal non-discrimination protections. I’ll continue to speak out on behalf of our transgender brothers and sisters and lend my time and energy toward gaining much-needed protections for them. I also plan to become more involved with fighting homelessness among LGBTQ youth.

Read about Jim Obergefell and other LGBT trailblazers in the Fall 2015 issue of SAGEMatters. Download our Talk Before You Walk toolkit and infographics to learn how marriage equality affects your finances. Sign up for monthly email updates at sageusa.org/subscribe.