The Impact of Fulton v. City of Philadelphia on LGBTQ+ Elders

Let’s travel a year into the future.  Imagine it’s Thanksgiving, 2021.  James (79) and his husband Tim (80) go to the senior center in the basement of St. Anthony’s Church to meet up with their friends for the senior center’s annual Thanksgiving dinner.  Montgomery County’s Department for the Aging (DFTA) contracts with St. Anthony’s to provide meals to seniors.  But this Thanksgiving is different.  There’s a sign on the door of St. Anthony’s senior center.  It says: “No same-sex couples.”  Despite receiving taxpayer dollars to perform a government service, St. Anthony’s is using religion as a license to discriminate and to deny equal treatment to James and Tim.  And despite Montgomery County’s non-discrimination ordinance and the clause in its contract with DFTA that it may not discriminate based on sexual orientation, it’s perfectly legal.  Shocked, they go home, and they split a Thanksgiving TV dinner.

Across town, a trans woman named Marcy (69) just got out of the hospital.  She broke her hip and for the first time in her life and she needs transportation assistance to get to her doctors’ offices and the grocery store.  She loves cranberry sauce and stuffing and she’s hoping to get to the grocery store before dinner.  She calls the Department for the Aging (DFTA) for transportation assistance.  It turns out that DFTA contracts with a non-profit called Religion on a Roll to help older people in the community with transportation challenges.  Before Religion on a Roll picks her up, a volunteer calls Marcy to confirm her information.  Marcy shares that because she has transitioned, her government-issued photo ID might not match her name or how she presents. The volunteer responds that she’s canceling the ride because the organization does not serve transgender people. Despite receiving taxpayer dollars to perform a government service, Religion on a Roll is using its religious mission as license to discriminate, to deny equal treatment to Marcy.  And despite Montgomery County’s non-discrimination ordinance, and the clause in its contract with DFTA that it will not discriminate based on gender identity, it’s perfectly legal.  Marcy takes some Tylenol and eats leftovers alone on Thanksgiving.

This could all really happen as soon as next year because of a case the Supreme Court will hear on November 4 called Fulton v. City of Philadelphia.  In Fulton, the City of Philadelphia contracted with Catholic Social Services to help place children in the city’s custody with foster parents.  Despite receiving taxpayer dollars to perform the government service of doing home studies and certifying that prospective foster parents meet the requirements imposed by state law (which do not exclude LGBTQ+ people), and despite a clause in its contract with Philadelphia that it would not discriminate based on sexual orientation, Catholic Social Services said it would not certify same-sex couples as prospective foster parents.  Instead, it wanted to use religion as a license to discriminate and to deny equal treatment to LGBTQ+ individuals.  The Supreme Court will consider whether organizations that receive taxpayer dollars to perform government functions can use religion as a license to discriminate. A ruling in favor of Catholic Social Services could also give religious agencies a broad license to discriminate while providing government services with taxpayer money. The impact of this case could go far beyond foster care and also apply to food banks, homeless shelters, hospitals, disaster relief agencies and other taxpayer-funded services. And it wouldn’t just allow agencies to discriminate against LGBTQ+ people—it could also be used to deny essential government services to people of minority faiths, unmarried couples, and others.  Unfortunately, this is already happening. Taxpayer-funded foster agencies have turned away qualified Jewish and Catholic parents seeking to serve as foster parents, and disaster relief agencies that take taxpayer funds have rejected volunteers who won’t sign statements opposing same-sex marriage.

Given the recent appointment of Justice Amy Coney Barrett to the Court, there is a greater chance than ever that the Supreme Court will rule that religiously affiliated organizations – even those that take taxpayer dollars to perform government services – will be allowed to use their religion as a license to discriminate and deny equal treatment to LGBTQ+ older people and others.  A negative ruling in this case could put all current LGBTQ+ non-discrimination protections at risk, by creating a carve-out so expansive that it practically swallows the laws themselves.  For more information on what’s at risk for LGBTQ+ older people in this case, check out an issue brief on Fulton that SAGE and our friends at MAP and CAP put together.  For a deeper dive into the issues at stake, see the amicus brief that SAGE and 25 other organizations serving older and disabled individuals filed in the case. 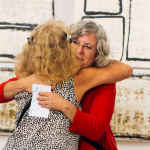