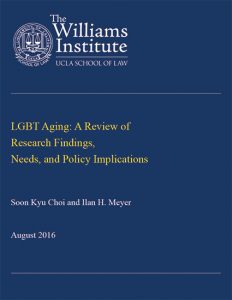 Although definitions vary, LGBT older adults include the population of sexual and gender minorities over the age of 50. With no census count available of LGBT older adults residing in the United States, investigators have used various methods to estimate the size of the population. One study estimates that there are over 2.4 million LGBT adults over age 50 in the United States, with the expectations that this number will double to over 5 million by 2030. Another study estimated that there are between 1.75 to 4 million LGBT adults above age 60. Without a national probability sample, accurate characterization of this population is difficult. However, numerous community-based, non-probability studies provide invaluable insight into the experiences of LGBT older adults and show that LGBT older adults face unique challenges to aging that their heterosexual, cisgender peers do not.