This Pharmacist Had Vaccine Doses to Spare. So He Hit the Road

In: Housing, In the News, LGBT Aging, Wellness

In a city scrambling to vaccinate people against Covid-19 as quickly as possible, Ambar Keluskar faced a problem this month that seemed to defy logic: Mr. Keluskar, a pharmacist in Brooklyn, struggled to find people to take the 200 doses he had on hand.

“They were just sitting in the freezer,” he said.

State rules restricted who could get shots at independent pharmacies like his to certain older residents, and fewer and fewer people seemed to be scheduling appointments. The problem was even more vexing because his pharmacy, Rossi Pharmacy, draws many customers from East New York, a community hit hard by the pandemic and where the vaccination rate lags behind other parts of New York City.

Mr. Keluskar’s pharmacy spent hundreds of dollars on Facebook advertisements to let people know he had available doses. He asked community leaders to spread the word. Then he decided to try a different way to reach people who may otherwise be overlooked: Instead of waiting for them to come to the pharmacy, he would take his doses to them.

Mr. Keluskar’s experience reflects the many ways in which a disorganized vaccine rollout has forced officials and distributors to constantly retool their approaches while confronting messy realities on the ground.

Vaccine providers and would-be recipients alike have been confronted by bureaucratic eligibility rules, a shifting understanding of the virus and a sign-up system that can be prohibitively complex. Despite officials’ insistence on equity, vaccinations have been slower to reach many communities where the virus has inflicted the highest toll, and where people may not have the time or resources to easily sign up for appointments.

In response to these problems, volunteers and community groups have gotten creative, building appointment websites that improve on the official offerings, hosting pop-up clinics at churches and helping eligible neighbors navigate the confusing landscape.

Among the people seeking to fill that void was Mr. Keluskar, who earlier this month, following a tip from a state senator’s office, vaccinated almost 50 people at a senior affordable housing complex near Downtown Brooklyn who were homebound or struggling to find appointments elsewhere. On Saturday, he vaccinated more than 150 people at Ingersoll Houses, a public housing complex in Fort Greene. He said he would ask for a bigger allocation of doses to do more pop-up style events in communities in need.

“The patients loved it,” he said. “They got to get vaccinated somewhere local.”

Mr. Keluskar said he hoped his method could inspire other city officials or pharmacists to try new ways of doing outreach.

While the pace of vaccinations has picked up in New York and across the nation recently, virus variants loom, and officials believe a return to normalcy and safety is still months away. Older people in lower-income communities with poor internet access have had a particularly hard time signing up for vaccinations, with appointments snatched up by people with better connectivity or more time to scour for new slots.

Neighborhood pharmacies have been an important part of the vaccination rollout, a spokesman for the city’s health department said. In many cases, they have built unique levels of trust with residents in their communities.

And while they do receive fees from insurers to administer doses — $13 to $28 per shot, according to Mr. Keluskar — many pharmacies are facing financial strains from the vaccination rollout. Mr. Keluskar said he was operating at a loss after investing some $15,000 in equipment, like a freezer and portable refrigerator, and that he and his staff have worked many unpaid hours.

Mr. Keluskar, who became the supervisor for Rossi Pharmacy about five years ago, began offering vaccinations in January. He started with 100 doses per week, and then asked the government to double the number of doses sent to his pharmacy as the need for vaccinations went up.

At the end of February, he noticed the number of sign-ups declining. In one week, the pharmacy had burned through its entire waiting list, he said.

By the first week of March, Mr. Keluskar struggled to find eligible people to vaccinate. The state requires that providers administer all their doses within seven days or notify the state, and Mr. Keluskar worried that officials would take back his unused doses and not send him any more.

Mr. Keluskar said he thought there were several reasons for the decline at his pharmacy, including the opening of a mass vaccination site nearby.

Though eligibility expanded last week, only teachers, child care workers and people ages 60 and older can be vaccinated at pharmacies. Gov. Andrew M. Cuomo has said pharmacies may lack the ability to verify the identity and occupation of people in other eligible groups, like essential workers or younger people with underlying conditions.

Mr. Keluskar said he thought that the pool of people who both met state requirements and could travel to his pharmacy a few blocks from East New York station had been exhausted.

As he searched for other options, Mr. Keluskar said an employee in the office of State Senator Jabari Brisport connected him with the Stonewall House, an affordable housing complex for L.G.B.T.Q. seniors in Brooklyn.

George Berry, 66, who lives in the Stonewall House and helped organize the vaccinations there, said a majority of the residents had not been vaccinated. Many were homebound, he said.

Emma DeJesus, also a Stonewall resident, said she had been unsuccessfully trying to get a vaccine appointment for weeks before she got a shot at Mr. Keluskar’s event.

“I can’t handle the phone,” she said. “I’m 78. Everything is on the computer now and I don’t have a computer.”

After she gets her second dose, Ms. DeJesus looks forward to visiting her nieces in the Bronx and seeing her sister, who lives in the Flatbush section of Brooklyn.

After that first event, Mr. Keluskar said two city councilmen, whom he declined to identify, contacted him about doing similar events. He said he had administered nearly 2,000 doses so far, and that he could vaccinate even more people if the state lifted restrictions on pharmacies.

“In the meantime,” Mr. Keluskar said, “we have to do everything we can to stay in the program, and keep providing, keep vaccinating people.”

This article was originally published in The New York Times on March 16, 2021. 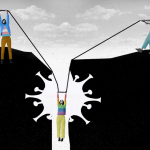 A year into the pandemic, LGBTQ+ life and death remains largely invisibleDiscrimination, Health Care, In the News, Social Isolation