The Biden Administration Is Paying Survivors Benefits to LGBTQ+ Elders

The Biden administration reversed a Trump-era decision to fight the payouts.

Thousand of LGBTQ+ elders who were in long-term relationships before the legalization of same-sex marriage are now eligible for survivors benefits, following a years-long battle.

Last November, the Biden administration dismissed Trump-era appeals to court decisions that had affirmed the rights of surviving same-sex partners to receive the spousal benefits, even if they were never able to get married or if they were married for less than nine months.

In twin class action lawsuits initially filed in 2018 — Ely vs. Saul and Thornton vs. Saul — the LGBTQ+ advocacy organization Lambda Legal made the case that survivors should not be denied these benefits because of past discriminatory legislation.

Federal judges ruled in favor of the plaintiffs in both cases in 2020, but the Trump administration attempted to appeal the decisions, delaying implementation of the benefits for several more months. In November, the Department of Justice and the Social Security Administration, now under the Biden administration, withdrew those appeals, enabling the titular plaintiffs and all class members to receive monthly benefits and retroactive payments.

“I wanted Social Security to see that here was a lesbian couple that was together for 27 years, and here are the consequences of not having equal rights under the law,” Helen Thornton, the named plaintiff in Thornton v. Saul, told The New York Times in a recent report on the expanded benefits.

Thornton, who shared a three-decade romance with her late partner Margery Brown, now receives $1,849 every month, which is twice what she received prior to being paid survivors benefits, according to the Times. Thornton also received a one-time $72,000 payment for the years that she was denied benefits, after initially applying in 2015.

Meanwhile, Anthony Gonzales, a gay man whose experience was cited in the Ely case, now receives $1,800 every month, in addition to a one-time payment of $90,000. Gonzales was married to his late partner for six months; his home state of Arizona only began issuing license marriages to same-sex couples in August 2013, and his partner developed rectal cancer and died in early 2014. When he was denied survivors’ benefits because of the length of the marriage, Gonzales “decided to fight it.”

“We both believed that as gay men we should have the same rights as anybody else,” Gonzales told the Times.

The Social Security Administration has reportedly been trained to examine factors that determine whether or not a couple would have been married, including “joint bank accounts, leases, mortgages, insurance policies or wills,” according to the Times report. Evidence can also include sharing a home, or “even photos and love letters.

Notably, both Johnson and Gonzales describe having been in economically precarious situations prior to receiving surivor’s benefits. Gonzales lost his job soon after his partner died and had trouble finding another, while Johnson “turned to pet-sitting” to supplement her benefits, living “frugally” and being unable to visit family often. They both fit into the broader demographic of LGBTQ+ elders, who are disproportionately more likely to experience financial hardship.

According to a report from the Movement Advancement Project and Services & Advocacy for GLBT Elders (SAGE), nearly one third of LGBTQ+ adults ages 65 and older live at or below 200% of the poverty level, with 48% of trans elders experiencing poverty.

The disproportionate economic precocity that queer and trans elders face explains why the rulings are so monumental — and only adds urgency to public outreach. Advocates say that the Social Security Administration must do more to notify survivors that they’re eligible for benefits at all. While the agency has reportedly notified 700 people who previously applied and were denied benefits, fewer than 100 claims were processed as of October. As writer Mark Joseph Stern noted for Slate, the “responsibility to identify beneficiaries and help them claim their money now falls on the LGBTQ community and its allies,” since many who are eligible will likely die without ever having claimed the thousands of dollars owed to them by the federal government.

If you or someone you know could potentially be eligible for benefits as a member of either class, Lambda Legal has an FAQ on applying for benefits here.

This article originally appeared in them. on February 1, 2022. 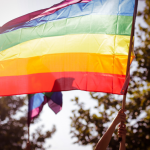