“I am thrilled at the opportunity to present our Advocacy Award to Carmen for her fierce and determined activism and leadership,” said SAGE CEO Michael Adams. “After decades of serving our movement nationally, on each coast and everywhere in between, Carmen is still at the frontlines of the movement and embodies the definition of a true ‘sage.’ She has always being a steadfast friend of SAGE, and I am honored to recognize her vast accomplishments here at Creating Change.”

“I am privileged to be honored by SAGE,” said Vázquez. “Their work to advocate and care for LGBT elders has given hope and solace to thousands of us older folks for decades. I’m proud to be a supporter and hope many will join me. SAGE leadership and staff represent the very best of what intergenerational work should look like now and in the future.”

Carmen Vázquez was born in Puerto Rico and grew up in Harlem, New York. Among her many accomplishments, Carmen was the Founding Director of the Women’s Building in San Francisco and helped found the Lavender Youth Recreation and Information Center as well. In New York City, Carmen served as the Deputy Executive Director of the Empire State Pride Agenda  served as the policy director of the New York City LGBT Community Services Center, where she was a founder of Causes in Common, a ground-breaking coalition of Reproductive Justice and LGBT Liberation activists. While at the Center, Carmen also co-founded the New York State LGBT Health & Human Services Network, a coalition of over 55 organizations that collectively advocate for funding for LGBT Health and Human Services, and moved on to work for the NYS Department of Health. In addition to board leadership at many national LGBT organizations, Carmen has left her mark via the written word. Her essays have been published in several anthologies and she has made scores of keynote presentations at conferences and college campuses across the United States. Carmen is currently the Co-Chair of the Woodhull Freedom Foundation Board of Directors and lives in Brooklyn, NY. 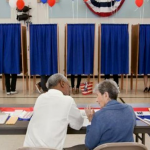