OPINION: We have groundwork to end the HIV epidemic. Now it’s time to execute

In: Health Care, HIV/AIDS, In the News

On World AIDS Day earlier this month, the White House Office of National AIDS Policy (ONAP) released the updated National HIV/AIDS Strategy. Its goal to “end the HIV epidemic in the United States by 2030” is the most far-reaching and inclusive blueprint created by any presidential administration.

And for the first time, a plan to combat this epidemic includes “focusing on the needs of the growing population of people aging with HIV.” As someone currently aging with HIV, this is an incredibly welcome move, but much is needed to be done.

It has been 40 years since AIDS first intruded into our lives. Progress has been slow, but much has changed over time. I know because I’ve lived with HIV since 1983.

My doctor even told me that I had “less than two years to live” after my HIV test came back positive. But look at me now: I’m 62-years-old and a long-term HIV survivor who is aging with AIDS.

The refrain we often hear is “we lost a generation to AIDS,” but that is not true. More than half of people living with HIV in the U.S. are over 50, something that is quite extraordinary considering the fact that having HIV was considered a terminal diagnosis not too long ago

For ONAP’s strategy to succeed, we need universal treatment access in order to increase viral suppression among people living with HIV who are not yet suppressed.

This can be accomplished through testing and treatment initiatives, education and outreach, awareness campaigns, strengthening the HIV workforce, and advocacy. Programs such as the Undetectable = Untransmittable, or U=U movement, its Journey to 400,000 (Jto400K) campaign, my Let’s Kick “ASS” initiative, as well as organizations such as SAGEPositive, are terrific living examples.

Currently, there are an estimated 400,000 people across the United States with HIV who are not virally suppressed. The reasons vary with some not yet being diagnosed, while others are not engaged in care due to HIV stigma, racism, and poverty.

It is a matter of social justice to increase access and eliminate barriers to treatment, care, and diagnostics for our population.

Why is universal treatment for HIV access so important? Effective medication keeps HIV at bay and helps those infected live healthier and longer. What is truly groundbreaking, and still largely unknown, is that effective treatments result in HIV prevention.

This is especially needed now after the coronavirus pandemic has disrupted HIV prevention and care efforts across the United States over the past two years. Some people may need to be re-engaged after experiencing a disruption in HIV treatment or care.

For most of the U.S., COVID-19 is their first experience going through a pandemic. But for those of us who have been affected by AIDS, COVID-19 is our second.

We applaud and are excited for the direction ONAP is taking in creating the new strategy as we work to ultimately end this horrendous epidemic we’ve endured for decades.

However, we must recognize the continued struggle to the HIV epidemic is entrenched in systemic racism, poverty, homophobia and transphobia, which have minimized response efforts in the communities that need them the most.

Learning from previous mistakes by providing universal treatment access, along with expanding and enhancing vital programs and services, will be a tremendous step for this current administration to reach its goal of ending the epidemic by 2030.

They’ve talked the talk. But now, it’s time to walk the walk.

This op-ed was originally published on Openly on December 29, 2021. 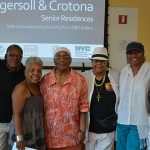