New York programs for veterans, as recommended by a veteran

President Joe Biden has set a deadline of September 11 — the 20th anniversary of the terrorist attacks — for full troop withdrawal from Afghanistan.

This means thousands of soldiers who have been stationed half a world away will be returning home to the U.S., many with physical and mental health needs.

Capital Tonight asked former Marine, Derek Coy, the veterans health officer at New York State Health Foundation, to recommend some of the best programs in New York for specific groups of veterans who may need help.

Coy, who served a year in Iraq and a year in southeast Asia, knows what it’s like to return home after combat.

“When I returned, I was dealing with some undiagnosed mental health issues, post-traumatic stress, etcetera.  Actually, I got back on my feet working with these great veterans’ organizations when I was going to grad school in New York City,” he said.  “After that, I decided I wanted to pay it forward and help other vets.”

Here are his top three:

“I don’t think you’re going to talk to anyone in the vets’ space in New York and not hear about that one,” he said.

The idea behind the program is simple. It connects a veteran with a veteran peer mentor.

“If someone is having a tough time transitioning or has some tough questions about unemployment or maybe mental health resources, the peer mentors are trained to be an ear to listen and also connect them, since they have transitioned out of the service themselves.” Coy explained.  “It gives vets someone to lean on and not feel isolated.”

Isolation is one of the challenges that many veterans face when they transition out of the military.

There is also SAGE, a statewide program to help lesbian, gay, bisexual and transgender older adults who are veterans of military service.

The New York Defenders Association has been at the forefront of advocating for Veterans Treatment Courts (VTC). The organization also provides culturally competent legal representation for veterans, which goes hand-in-glove with VTCs.

“If a veteran has a mental health issue and that’s the cause of them being involved in the justice system, Veterans Treatment Courts offer them treatment from the VA hospital plus a peer mentor in lieu of incarceration,” Coy explained.

“I think the big takeaway there is that between World War II and today, about 100,000 veterans were kicked out of the service just for their sexual orientation,” said Coy. “Not only is that cruel for a lot of reasons, but in addition, it would strip them of any benefits that they would receive.”

Not only were these soldiers dishonorably discharged, they also would be denied access to VA healthcare as well as the safety net programs that most veterans are entitled to.

“We can acknowledge that not only was it terrible that they got kicked out, but it really put them at a disadvantage by not allowing them benefits that they rightfully deserve,” explained Coy.

This article was originally published in Spectrum News on April 23, 2021. 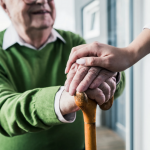 A New D.C. Program Wants to House Homeless LGBTQ+ SeniorsHousing, In the News 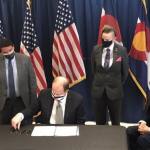