A new bill that gives New York state veterans eligibility for benefits that they were denied based on their sexual orientation has been passed into law.

On Veterans Day, Senator Brad Hoylman commemorated the passing of the Restoration of Honor Act, his bill with Assembly Member Didi Barrett. This new law provides a pathway to eligibility for state veterans benefits to New Yorkers who were discharged less than honorably from the U.S. Armed Forces due to their sexual orientation, gender identity or expression, military sexual trauma, traumatic brain injury or post-traumatic stress disorder.

“If you serve our country, our country should take care of you–period. The legacy of discriminatory prohibitions on military service means generations of LGBTQIA+ Americans are still unable to access many veterans’ benefits due to the status of their military discharge,” said Hoylman. “We are taking a major step forward tomorrow to correct that grave injustice with the implementation of the Restoration of Honor Act. I am proud to have helped pass the Restoration of Honor Act, thanks to the leadership of Senate Majority Leader Andrea Stewart-Cousins and with the partnership of Assembly Member Didi Barrett. While much work lies ahead to reverse the Trump administration’s attacks on transgender service members, this is an important advance in New York State.”

A study released by Hoylman in 2015 found that there are at least 53 state benefits for veterans that are contingent on their discharge status. New Yorkers who were discharged less than honorably solely on the basis of their sexual orientation, gender identity or expression, military sexual trauma, traumatic brain injuries or post-traumatic stress disorder have been unable to access these benefits to this point.

“It was pure chance that I completed my military service as a gay soldier without ‘getting caught’. The military in World War II was full of gay men and women, and it is thanks to them that I learned about the world I was facing upon returning to civilian life,” said Edward Field, ex-2nd Lt., 8th Air Force, 1942-1945. “I was one of the lucky ones. Several of my buddies were discharged without honor and, without veterans’ benefits and tarnished by the social disgrace, faced a struggle returning to civilian life. Thanks to this legislation all gay veterans will be able to get the benefits they deserve.”

The New York State Division of Veterans Services (NYS DVS) began accepting applications from potentially eligible veterans in June 2020. Decisions on those applications are expected to be provided on Nov. 12, 2020, when the law goes into effect.

“NYC Veterans Alliance strongly supports the Restoration of Honor Act for providing service members the opportunity to receive the recognition and benefits they earned for the sacrifices made for our country,” said James Fitzgerald, Deputy Director of NYC Veterans Alliance. “This legislation is meaningful progress towards restoring the full honor and dignity to those unfairly or unjustly treated during their service. We remain grateful to Senator Hoylman for his leadership and upholding the ideals that our fighting men and women risk their lives every day to defend.”

“We are thrilled to see the Restoration of Honor Act take effect on Veterans Day and on the first anniversary after it was signed by Governor Cuomo,” said Lynn Faria, Executive Vice President at SAGE (Service & Advocacy for GLBT Elders). “Over the last year, our statewide SAGEVets program has been working with older LGBT veterans and the NYS Department for Veterans Services so that these heroes have their honor restored in a process that is based on fairness and equality.” Continued Faria, “Thanks to Governor Cuomo and the leadership of Senator Brad Hoylman and Assembly Member Didi Barrett, older LGBT veterans can now access the services they need and deserve. New York State has adopted model legislation for the country, and we look forward to a day when all LGBT people, including transgender people, can openly join and serve in the military.”

Discharged veterans who think that they may qualify to restore their access to state veterans benefits under the Restoration of Honor Act can find more information on the NYS DVS website.

This article was originally published in Bronx Times on November 12, 2020. 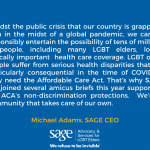 Healthcare for LGBT Elders and Tens of Millions at StakePress Releases 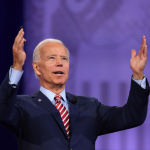