Every year, TIME highlights the 100 most influential people. This year we are also celebrating an organization that leads with love. TIME101, in partnership with P&G, honors SAGE, Advocacy and Services for LGBTQ+ Elders. SAGE’s supportive services have been helping older members of the LGBTQ+ community since 1978. The organization supports and connects elder LGBTQ+ pioneers and helps them care for each other, critical work considering these LGBTQ+ elders are twice as likely to be single and live alone while also being four times less likely to have children. With a loneliness epidemic and a global pandemic limiting social contact for so long, SAGE’s services have been paramount, and many younger LGBTQ+ participants have stepped up to help their older counterparts. And that intergenerational spirit doesn’t stop with the community  – it also extends to their staff.

Take Marie Spivey, a SAGE elder and volunteer, and José Collazo, a SAGE staff member, who both work for the organization and have a deep relationship they’ve built over time in the Bronx. Marie came out in her 50s after her youngest of five children left for college, and her depression and isolation threatened to sidetrack her newfound open life – that is, until she became involved with SAGE. “I found my people, I found my family, I found a purpose in my later years,” she says.

LGBTQ+ elders are twice as likely to be single
and four times less likely to have children.

During her time with the organization, Marie began working with José, who has been the Site Director for SAGE Center Bronx at Crotona Pride House for nearly eight years. A natural caregiver himself, José found a safe space at SAGE and has devoted himself to looking after the center’s participants, whether through community events, assisting the residents with everyday tasks or simply creating a sense of belonging for those he serves.

Despite their age difference, the intergenerational dynamic between Marie and José helps them learn from each other but also those in their community, and they regularly rely on each other’s wisdom and experience as they move through their days at SAGE. They refer to each other as wonder man and wonder woman, highlighting each other’s compassion and unselfishness as what keeps their relationship strong and their work dedicated.

“We come from different generations and there are certain ways that she sees things that I need to tap into,” José says. “She gives me a bridge to a generation that she can speak to and that I can utilize so we’re providing the best quality of service that we can.”

SAGE is a beneficiary of P&G and iHeart’s LGBTQ+ Can’t Cancel Pride program, which has raised over $8M for LGBTQ+ organizations, with a sustained record of positive impact. Congratulations to SAGE for their recognition as TIME’s 101 nominee for Leading with Love. To learn more about SAGE, and the incredible relationship between Marie and José, watch the video above.

This article originally appeared in TIME on June 13, 2022. 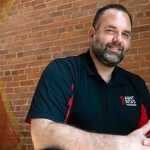