As the coronavirus pandemic continues to spread rapidly throughout the U.S., LGBTQ+  individuals of all ages are left vulnerable by the Trump administration’s illegal action, which implicitly permits discrimination when providing critical services. This unlawful federal abandonment of the LGBTQ+ community is particularly dangerous now, and could have catastrophic, even deadly consequences. This license to discriminate could facilitate denial of services, such as home-delivered meals, access to shelters, and fostering a homeless child.

Now, because of the Trump administration’s decision to no longer enforce these non-discrimination protections:

“In November 2019, the U.S Department of Health and Human Services acted illegally by choosing, unilaterally and without justification, to ignore existing law that prevented HHS grantees from discriminating on the basis of sexual orientation and gender identity,” said The Rev. Stan J. Sloan, CEO of Family Equality. “This action runs counter to HHS’ mission — to enhance the health and well-being of all Americans — and instead places the well-being of millions of vulnerable LGBTQ+ Americans at risk. As a result, Family Equality joins with our friends at True Colors United and SAGE to ask that the court overturn this illegal and discriminatory HHS action. Family Equality takes no pleasure in suing HHS — rather, we wish the federal government were responsive to the needs of vulnerable LGBTQ+ Americans — but under the circumstances we have no choice but to ask the courts to intervene to ensure LGBTQ+ people are afforded the protections we deserve.”

“The Federal Government has a duty to protect the most vulnerable among us – especially with regard to our youth. By abdicating its responsibility to protect LGBTQ+ Americans from discrimination in accessing critical programs, HHS commits a grave violation against the people it exists to serve,” says Gregory Lewis, Executive Director & CEO of True Colors United. “LGBTQ+ youth are 120% more likely to experience homelessness than their straight and cisgender peers. Transgender youth are at especially high risk and face unique types of discrimination and trauma while experiencing homelessness. Young people should never have to fear discrimination or violence in seeking services, and we must not fail them by rolling back the very policies meant to protect them.”

“Now more than ever, we see the critical role that the federal government must play to protect the most vulnerable and at-risk members of society,” said SAGE CEO Michael Adams. “Ensuring that all older people have access to critical aging services and supports free from discrimination is vital for the health and well-being of LGBTQ+ elders. This is not the time for the Trump administration to eviscerate the rights of LGBTQ+ older people. In suing the Trump administration, SAGE and LGBTQ+ elders are stating that ‘we refuse to be invisible’ and we will have our day in court.”

“We are suing the Trump Administration because of its cruel effort to make it easier for HHS grant recipients to discriminate against LGBTQ+ youth, families, and older people, in ways that put their lives at risk,” said Puneet Cheema, Staff Attorney at Lambda Legal. “At any moment, but especially at a time of a global pandemic, it is callous to expose already vulnerable populations to discrimination, and allow them to be denied basic, critical services. The federal government should be making sure everyone who receives HHS grant funding does not deny LGBTQ+ people access to critical, life-saving services like health care, housing and child welfare services, instead of inviting discrimination, as they do here.”

Access to HHS-funded, grantee-provided services, such as home delivered meals and emergency shelters, are a high priority for LGBTQ+ people, many of whom may be at heightened risk for COVID-19. The Trump administration’s unlawful refusal to uphold nondiscrimination rules, and its systemic abandonment of civil rights protections, puts these at-risk communities in greater danger.

HHS administers approximately $500 billion in federal grants. Following the landmark Supreme Court rulings in U.S. v. Windsor and Obergefell v. Hodges, HHS aligned its regulations to explicitly protect the constitutional rights of LGBTQ+ people and to prohibit discrimination in HHS grant-funded programs. In November 2019, HHS proposed new rules to weaken the non-discrimination protections in a broad range of HHS-funded programs. Simultaneously, HHS announced that it would no longer enforce its current anti-discrimination protections that govern HHS grants. Today’s complaint charges that HHS violated the law by not providing the public any notice or an opportunity to comment on its refusal to uphold nondiscrimination rules.

The case was filed on Thursday, March 19, 2020 in the United States District Court for the Southern District of New York. 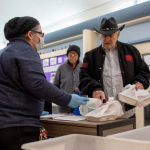 ‘I’m Really Isolated Now’: When Elders Have to Fight Coronavirus AloneHealth Care, In the News, Wellness 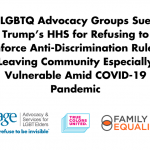