Inside a Home for L.G.B.T.Q. Seniors: ‘I Made Friends Here.’

In: Housing, In the News, LGBT Aging

She was a teenager growing up in Queens when her mother kicked her out of the house for having a girlfriend. It was the 1960s, and being gay was “taboo,” Diedra Nottingham remembered. With nowhere to turn, she wound up sleeping in parks and hallways.

Over the years, Ms. Nottingham, now 71, struggled to maintain stable housing, sometimes living with friends or relatives, sometimes in a women’s shelter. Epileptic seizures kept her from holding a steady job, hampering her ability to pay rent.

Weary of the harassment she faced in shelters and S.R.O.s, she met a social worker who put her in touch with SAGE, a New York advocacy group for L.G.B.T.Q. older adults.

In 2020, Ms. Nottingham settled into a new one-bedroom apartment in the Stonewall House, the group’s L.G.B.T.Q.-friendly housing development in Fort Greene. “There are people like me in this building,” she said.

Aging in New York is not easy. Many older residents have little to no savings and a limited budget to pay for food, health care and shelter. Fears of discrimination can complicate matters for aging L.G.B.T.Q. Americans, many of whom lived through a time when being open about their orientation could lead to physical violence, arrest or getting fired from a job. In a 2018 survey of adults age 45 and older who identified as lesbian, gay, bisexual or transgender, 34 percent said they were worried they would have tohide their identity to gain access to suitable housing, according to AARP.

“L.G.B.T.Q. folks are much more likely to grow old single” because many never married or had children, said Michael Adams, the chief executive of SAGE. “What we have seen historically is that elders have been forgotten and they don’t have the support they need.”

SAGE was founded in 1978 to help address those challenges in three ways: support for elders, training for caregivers and advocacy of public policy. Over the years, it has grown to a staff of more than 100 and a $15 million annual budget, Mr. Adams said, but the mission is still the same: “to lift up and honor and celebrate the elder pioneers of the L.G.B.T.Q. community.”

In recent years, affordable housing has become a priority for the organization, which opened Stonewall House in December 2019, and Crotona Senior Residences in the Bronx last March. For Ms. Nottingham and other residents, the timing has proved crucial. After plunging in the pandemic,rents in New York are once again climbing to new heights, pushing many out ofapartments they can no longer afford. Basic necessities are soaring asinflation hits its fastest pace in more than 40 years.

At Stonewall House and Crotona Senior Residences, roughly a third of the apartments are set aside for formerly homeless adults, and potential tenants go through a screening process to meet income requirements, Mr. Adams said.

“People are just on the edge and need a little support that comes in the form of permanent housing,” he said. “A building like this allows people to get on the right side of that margin.”

SAGE also has created senior community centers at the two buildings. Anyone over 60 can stop by to eat a meal, join a book club or take a dance class.

At Stonewall House, about a 10-minute walk from Downtown Brooklyn, visitors to the community center are greeted with a bulletin board that displays the history about the Stonewall riots in 1969 in Greenwich Village, which is considered the start of the gay rights movement in the United States. The center has weekly movies, field trips and special events: Pink and blue balloons left over from a recent Transgender Day of Visibility celebration floated listlessly in a corner of one of the multipurpose rooms.

Stonewall House, which has 145 units, opened in 2019. A third of the apartments are set aside for formerly homeless adults.

Howard Grossman joined the walking club of SAGE’s community center. On a recent morning, they trekked to the Brooklyn Academy of Music.

“Once they step into our center, they have a history of Stonewall and what it means to our community,” said Odi Chigewe, the site director at the center.

Residents and neighbors start gathering in the center at 10 a.m. for a hot breakfast. “Other centers offer lunch, but I wanted a different approach,” Ms. Chigewe said. “They stay for fellowship.”

In the cafeteria on a recent morning, Barbara Abrams, a 77-year-old who identifies as L.G.B.T.Q., dined on pancakes, bacon and apple juice. She walks 20 minutes from her home every weekday for breakfast and stays at the center until 5 p.m. “This means that much to me.” she said. “I made friends here.”

At the next table, Howard Grossman, 66, had just arrived. “It’s a nice gathering,” he said. “I look forward to it every morning.” Afterward, he returned to the one-bedroom apartment he shares upstairs with his husband, Brad Smith, 61, a night owl who gets up too late to join the “breakfast club,” as Mr. Grossman put it.

Their one-bedroom apartment is crowded with papers, boxes and tchotchkes. An oversize cabinet stuffed with Lladró figurines and china teacups dominated the living room.

But their home has a view of the Brooklyn Navy Yard, as well as the Empire State Building in the distance, which Mr. Grossman painted in an art class downstairs. And it offered a welcoming community for an aging gay couple with few resources.

“We always thought it would be a dream to live some place where we could feel comfortable and safe and it would be accepting to us a couple,” Mr. Smith said.

Taking a break from preparing for Passover Seder, they settled into opposite ends of the couch, with a pillow between them for their cat, Miss Ava (who is afraid of strangers and did not make an appearance). On the coffee table sat a Marilyn Monroe cookie jar, a gift from a friend who died of AIDS.

The couple met on Halloween night in 1982 in Florida. “We had exchanged numbers, but I threw it away,” Mr. Grossman said with a chuckle. “I was in a strange place. Thankfully, he called. We started going out and realized we could make this work.”

They bought a house in Fort Lauderdale in 1994, and when same-sex marriage was recognized in Washington, D.C., they drove to the nation’s capital to get married on Aug. 11, 2014.

But bills and stress were mounting. Mr. Smith worked hourly corporate jobs, sometimes getting laid off when business slowed. After surgery to repair an aortic dissection in 2016, Mr. Grossman left his job working in customer service for Wyndham, a hotel and resort company, and they sold their home (which they described as “a money pit”). They had some money from the sale of the house and in Mr. Grossman’s 401(k), but they had no concrete plan for retirement.

“You are on limited income but expenses keep going up,” Mr. Smith said. “You get to a point where you wonder what you’re going to do.”

On top of health and financial worries, they wanted a safe environment with social programs for gay seniors. When the lottery for Stonewall House opened up, they applied immediately. After their names were drawn, they moved in February 2020. SAGE provides not only the housing, but the social services they need.

“We do have a social worker that is available to us through the SAGE center to help find programs that the city might offer,” Mr. Smith said. After emergency gallbladder surgery last year, the social worker helped him arrange a home care aide, a walker and a medical alert device that monitors falls.

“This building and this concept has become a nurturing community,” Mr. Grossman said.

Five floors above them, Ms. Nottingham still has her walls up. Stonewall House, following New York law that prohibits discrimination, is open to everyone, and she fears that she could encounter residents and visitors from the neighborhood who are intolerant and even hostile toward L.G.B.T.Q. people.

“I got jumped so many times for being gay,” she said, adding that she will not go to the adjoining SAGE Center. “I believe there’s going to be trouble, and I don’t want to get caught in trouble.”

She said she had a few friends at Stonewall House, but she mostly keeps to herself. She wakes up before dawn every morning to watch reruns of “Beauty and the Beast” and “Scandal,” then goes out for a walk. “I call it my morning brisk,” she said.

In the afternoons, she winds down at home, catching up on her soap operas with a mug of hot orange pekoe tea.

Born in Queens in a working-class family, she moved around a lot as a child. Life at home was chaotic: Her father left when she was young, her stepfather physically abused her, and her mother shunned her when she came out as a teenager. Her childhood caregivers are dead now, but she still carries the scars they inflicted.

“I am still protective of myself,” she said. “I don’t trust everybody.”

Despite a lifetime of being on the move, Ms. Nottingham calls Brooklyn her home. This is where she rented her first apartment in her 20s and where she started her family, raising a daughter, Ashley, who is now a nurse in Seattle. “I wanted someone I could love of my own that wouldn’t be judgmental,” Ms. Nottingham, now a grandmother of five, said, adding that she took care of other children in the neighborhood, too, because babysitting was her only way to earn money.

She pointed at photos on her refrigerator. Framed photographs crowd the walls, too, and a jar of jelly beans sits on the counter, awaiting the next child to come over.

Life is easier now, knowing she has a safe and secure home back in the neighborhood where she built her own support base. “I’ve stayed all places, but all roads lead back to Brooklyn.”

This article originally appeared in The New York Times on April 22, 2022. 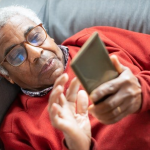