Gentle Yoga, Chair Aerobics, And Stomping On The Floor: How Seniors Are Staying Fit At Home

With thousands of New York City seniors being urged to stay off public transportation and away from crowded public areas, they’re spending more time in other physically treacherous environments: their own apartments.

“There’s two things that scare older adults the most — one is dementia, and the other one is a fall,” said fitness expert Celeste Carlucci. “It can happen to anybody, and it can be completely life-changing.”

According to the New York State Department of Health, falls are the leading cause of injury-related death and hospitalizations for people 65 or over. And even in a city where walk-up apartments and jerky buses present all kinds of obstacles, Carlucci says that a huge portion of falls still take place in seniors’ homes. Which is why the class she created, “Fall Stop, Move Strong,” has placed a stronger focus on students’ homes, now that instruction is happening virtually.

“I say, ‘Take a look around your apartment. Change it so you can adapt your apartment to age for as long as you want there,’” she said. “It’s kind of a mindset, to encourage them to take charge — not only physically, and to be part of an exercise program and a community, but also to take a look around. To clear walkways. To get some clutter out of there. To just empower yourself.”

“Fall Stop, Move Strong” — which is offered, among other ways, through Greenwich House — is one of many senior fitness classes that abruptly moved onto Zoom once stay-at-home orders went into effect.

I joined in a session earlier this month to see what the class entails, and came away with sore biceps (we were holding hand weights for much of the hour-long class) and a different understanding of fitness as a preventive measure.

“I’ve only been a senior citizen officially for a week now,” one student, Susan Levy, told me after class. “I used to walk all over the city … but with the new normal, I have not been out walking. I’ve also been spending a lot of time on computers because I teach computers to seniors, so I’m constantly sitting. And I find [the class] so helpful.”

Another student, Julie Halston, had been doing eight shows a week in Tootsie on Broadway before the pandemic hit. Now, she’s taking this course to stay limber.

“The first time I took the class, I was like, ‘Holy Toledo, I’m out of shape!’” Halston said.

“I think when people think about fall-prevention, they just think that it’s for the little old lady, and it’s for everyone,” Carlucci added. “It’s a way of staying healthy. And it’s a way of fighting what people are saying all around them — ’You’re at risk! You’re at risk!’ — ‘Well, I’m going to combat that by taking as good care of myself as possible.’”

Along with the physical benefits of strength and balance training, there’s a crucial mental health aspect to maintaining a fitness routine for seniors. SAGE, the senior center that advocates for LGBT New Yorkers, recently moved its free gentle yoga class onto Zoom. Instructor Richard Jonas told me that he’s tailoring some of his class to help students with pandemic-induced problems, like insomnia, and a sense of lost control.

“The important thing to remember is that yoga is really mind-training,” Jonas said. “Yoga is done in the body … it’s definitely a means to maintaining health and strength, especially as we age. But the thing is, it’s also a way to direct our minds out of those negative channels.

After class (I took this one, too), I spoke with one student, Vicki Karant, who said that while she hasn’t used the lockdown to take up all the hobbies she fantasizes about, she’s made a point of keeping the gentle yoga class in her routine.

“I’m a pretty anxious person,” she said. “I have a lot going on, I have an ancient mother in a nursing home in Florida. I had noticed before this that meditation was really good. The breathing and clearing of your mind — you work on it, and it works. It makes me feel calmer. I’m doing that every day, and it was inspired by attending the classes.”

SAGE and Greenwich House are two senior centers on a list of New York City institutions now offering free online fitness classes. But there are still plenty of seniors without the ability to access the internet at home, including many who are members of recreation centers run by the New York City Parks Department. In response, the department is doing what it can to conduct wellness check-ins over the phone.

“We have a very active senior group at St. Mary’s Recreation Center, the Senior Marlins [swim team]. So one of our recreation specialists has been in touch with them — about 11 to 12 seniors a week,” said Farrell Coates, the parks department’s Chief of Recreation for the Bronx. “At the Hansborough Recreation Center, they’ve called 367 senior members twice over the past five weeks. At the Chelsea Recreation Center in Manhattan, they’re contacting the 30 participants in the tone-up and aqua aerobics class.”

He said a big reason for the calls is to check on seniors who are living alone and feeling isolated because of the stay-at-home orders. But recreation center employees are also offering members a variety of fitness options, including over-the-phone instruction.

“If you can’t go online and do a zoom program, one of our teachers can walk [you] through what to do, verbally, to have a chair workout or a stretching workout,” Farrell said. “For instance, in a chair aerobics class — all you need, supply-wise, is a chair. You sit in the chair, make sure your back is straight, you then move your arms up to the ceiling. You’re doing an arm raise for a number of sets.”

NYC Parks had planned to hold its fifth annual Senior Games this month, which would’ve drawn hundreds of older athletes from all five boroughs to compete in pickleball, track, cornhole, swimming, and shuffleboard, among other events. Instead, many are at home, doing what they can to stay fit enough to go back out when all this ends.

At one point during my fall prevention class, Carlucci, the instructor, had us doing deep lunges that involved sticking your foot out and stomping hard enough to “really disturb your neighbors downstairs.”

“I remember someone telling me they were on the bus one day, and some kid hit them with their backpack, and they put their foot out, and they didn’t go down,” Carlucci told the class. “And that’s exactly why we’re doing this exercise. Because someday you’re going to be back on the bus.”

You can find the NYC Parks@Home events here. You can check out online classes from Greenwich House here and SAGE’s calendar of virtual classes here.

This article originally appeared in Gothamist on May 25, 2020. 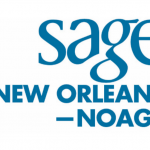 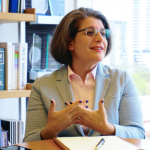