En español | This June, Cathy Renna was looking forward to what she calls one of the “highlights” of NYC Pride: a double-decker bus sponsored by SAGE, the country’s leading organization for LGBT elders, that carries older adults along the parade’s Manhattan route each year.

But the iconic red bus, which first hit the streets as a horse-drawn “SAGE coach” some 40 years ago, won’t appear at this year’s parade, which typically draws millions to the city every June as part of a month-long celebration of the LGBT community.

That’s because NYC Pride is among the hundreds of Pride parades and events that have been canceled or postponed in light of the coronavirus pandemic. As a result, organizers across the country have had just a few months to overhaul their plans in a way that’s safe and celebratory for all.

“New York City being one of the pandemic epicenters in the United States, they very quickly started planning ahead once it became evident that it was going to be impossible — in fact, not allowed — to have the events they normally do,” says Renna, the interim communications director of the National LGBTQ Task Force.

The new roster of NYC Pride events includes a special television broadcast on June 28 cohosted by Carson Kressley and featuring celebrity appearances and performances by Janelle Monáe, Deborah Cox, and Billy Porter, among others. (Watch it live from 12-2 p.m. ET on local station WABC Channel 7 or online at abc7ny.com.)

Heritage of Pride, the nonprofit organization behind NYC Pride, is expected to announce more virtual events in the weeks to come.

Despite the promise of digital events, Pride organizers say that having to cancel in-person celebrations has been bittersweet, particularly because this year marks the 50th anniversary of the first Pride parades, which were held in New York, San Francisco, Chicago and Los Angeles in 1970.

“We had a bit of a mourning period,” says Fred Lopez, executive director of San Francisco Pride. Lopez and his team decided to call off the city’s iconic parade and other pride events as the news of the virus’s spread became increasingly serious in March.

“As rough as this whole pandemic situation is, if you look at it in the right light, it’s bringing out the best in our community,” Lopez says. “Raising awareness, raising funds for those most affected, and raising spirits — which is one of the main things that we are trying to accomplish with our online celebration.”

Rather than go virtual, some cities have opted to reschedule their celebrations, hoping that crowds will be able to safely gather later in the year. New York’s Buffalo Pride Week, for example, will now be held August 17-23; Cincinnati Pride has been postponed until October 3.

In response to cancellations around the world, a global coalition of pride organizations — including partners from Germany, Sweden, Latin America and the United Kingdom — have joined forces for a 24-hour celebration to be livestreamed on June 27.

Known as Global Pride 2020, the first-of-its-kind celebration will feature remarks by political figures and movement leaders, as well as entertainment by Olivia Newton-John, the Dixie Chicks and others, plus audio and visual content from George Michael.

Renna, who is also involved in helping organize Global Pride 2020, sees the shift to virtual events as a silver lining of sorts, offering older adults easier access to Pride events at a time when bringing the LGBT community together has renewed urgency.

“This year, world Pride takes on a different meaning,” she says. “You can participate in any of these Prides, no matter where you are.”

This article originally appeared in AARP on June 2, 2020. 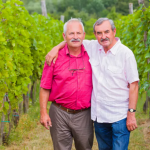