In: Discrimination, Housing, In the News

Before the shelter in place rules came into effect and businesses shut down, retired couple Pat McAuley and Margaret Roesch were forging ahead with a bold idea, to build a community where LGBTQ seniors feel at home.

“We wanted a place where we could hold hands, we could kiss each other, you know, hello or goodbye. And our relationship would be honored and respected,” said Roesch.

McAuley and Roesch founded Village Hearth Cohousing. It’s believed to be the first cohousing community in the nation built specifically for LGBTQ seniors and their allies. Nearly 30 pastel-colored bungalows branch off cement walking paths that intertwine through the neighbourhood in North Durham. Follow one of those paths and you’ll reach the common house, surrounded by windows and bordered by a terra cotta patio.

Cohousing originated in Denmark. The design model includes shared spaces but also private living areas. Imagine owning an apartment but doing most of the cooking in a shared kitchen with all the amenities. At Village Hearth the model works like a condo association with homeowners sharing costs for maintenance and other fees. Cohousing has picked up in popularity in the US., with more than 160 similar communities around the country, according to The Cohousing Association of the United States.

Roesch says she and McAuley saw the community as an opportunity to cut through some of the unique challenges LGBTQ individuals may face as they get older.

“We [have] seen and heard and read horror stories of people once they need to go into the standard medical model, they are forced to go back in the closet because it’s not safe or the people taunt them. [And it] took Pat and I forever to come out of the closet, we were both really late bloomers. And we don’t want to go back in,” said Roesch.

Tim Johnston, the senior director of national projects at SAGE, an advocacy and service organization for LGBT seniors, acknowledges that risks exist for these seniors in retirement centers.

“It might be isolating them or bullying them within the community. It could be substandard care such as having their call bell answered more slowly than the other residents or their food always arrives cold. And in some instances we’ve heard of physical or verbal abuse either from other residents or from staff at these communities,” said Johnston.

According to SAGE, LGBTQ seniors are less likely to have children and often lack the same social net as heterosexual seniors. Social interaction is important as people age and there are medical and practical reasons to have others nearby. But McAuley said living under the same roof with a group of friends is a little too close for comfort. For her, cohousing offers a perfect fit.

The next chapter, a fresh space

Roesch and McAuley recently got their first chance to walk into their new home, which was still under construction. They personally designed it along with the help of an architect who specializes in cohousing developments. They admired the vaulted ceilings, skylight, and exposed beam as they wandered through the space. The attached-bungalows go for between $299,000 to $409,000 with shared monthly fees ranging from $305 to $413 per month.

Before the coronavirus pandemic swept across the state, a few Village Hearth residents started moving to the area. And they’ve come from just about everywhere around the country, including California, Georgia and New York. Among the new residents are Allen Keech and Christopher Ross. Before moving to Durham, the couple already had a set retirement plan: they built an eco-friendly house on a sweeping 58-acre property in southern Virginia. But they discovered that privacy could also mean isolation, and Ross says that didn’t always feel comfortable.

“Yes, there were two or three other gay people in this town, but it was a whisper. You know, it’s okay as long as you don’t [make] noise about it,” said Ross.

‘To live not to die’

For Ross and Keech their new Village Hearth neighborhood strikes the right balance between privacy and community.

“We are going to be having a community garden to grow vegetables and fruit. And a dog park. And we are going to have bees and chickens,” said Keech as he walked along the cement path between the common house and his new home.

Building a community for seniors in the midst of the coronavirus pandemic has its challenges. Along with permit delays, some residents have moved from across the country but are in a holding pattern waiting to move into their new homes. This week, some of them, including Keech and Ross, should get to move in after delays due to COVID.

Ross says there’s also pressure with being the first group of LGBTQ seniors to build this kind of community.

“We talked about, should we have cameras? What kind of security should we have as a community, given that we’re putting ourselves out here into the public?” said Ross.

But in the end, the need to age and to live on their own terms wins out.

This article originally appeared in wunc 91.5 North Carolina Public Radio on May 20, 2020. 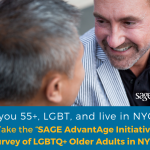 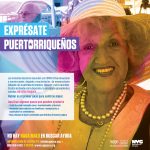