Kelly Kent brings almost two decades of experience to his role as director of SAGE’s National Housing Initiative, a new one at the organization. Kent, who divides his time between his hometown of Kansas City, Missouri, and SAGE’s New York City offices, talks about his rich background, what brought him back the Midwest, and the critical need for institutions like Citi that are helping establish models for older LGBTQ+ housing communities across the country. 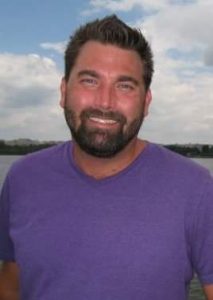 SAGE: How did you end up in Kansas City?

Kelly Kent: I returned to Kansas City a few years ago after being gone for more than 16 years. Since my parents were dealing with so many health issues associated with aging, it was important for me to be accessible to them at this time in their lives. Witnessing their experiences also has helped shape my professional life in the way that it intersects health and housing for aging adults.

You have a long career as an advocate for affordable, fair housing for vulnerable populations. How did you become involved in this area?

My work in affordable and fair housing for vulnerable populations has spanned almost 20 years. I first realized my passion for this work when I volunteered as a buddy at an AIDS housing project in 1995 when I was an undergrad at the University of Kansas. At the time, HIV/AIDS housing was often more assisted living or a hospice. I saw firsthand how affordable housing is a basic foundation in a tenant’s overall healthcare engagement. That experience helped solidify my dedication to that work. I was always interested in social justice and even concentrated much of my undergraduate studies on African-American studies.

Based on those first experiences, I became even more determined to complete my master’s degree in urban planning with an emphasis on housing policy and real estate finance. I interned for the Assistant Secretary of Fair Housing at the Department of Housing and Urban Development in Washington, D.C., and then the rest evolved as my professional education evolved. The passion remained over the course of time. Ensuring vulnerable populations have access to safe, stable housing makes a difference in their lives.

What drew you to SAGE?

Given my background, I have always had an affinity for working within the LGBTQ+ community. Once I moved back to Kansas City and experienced my own parents’ engagement with the healthcare system, I became motivated to begin coursework in gerontology to better understand the service needs of our rapidly growing older adult population. This led me to developing and overseeing a local public-private demonstration with a local hospital system, local governments, nonprofits, and corporate partners around the concept of aging in place. This was coupled with care coordination for seniors experiencing high rates of readmission to local Kansas City hospitals. I am convinced this is an issue the majority of communities have yet to effectively engage.

I met some of the SAGE staff at the American Society of Aging conference several years and told them about my interest in housing-related work for this population. When SAGE decided to increase its efforts in providing affordable housing for older LGBTQ+ adults late last year, I received a call from them.

Citi’s support as a funder in the community-development space is well known. As a leading provider in affordable housing finance, Citi recognizes that providing and developing affordable housing options helps revitalize neighborhoods and build inclusive cities. I feel fortunate to be working with SAGE and Citi on establishing replicable models for communities.

We could all use a little good news these days. Do you see any bright spots on the horizon for providing affordable LGBTQ+ housing for older people?

It is a challenging time, and even more so for the constituents we serve. When I’m feeling low, I remind myself of the shortage of affordable LGBTQ+ housing and it reignites my desire to redouble our efforts. I believe there are positive things to point to related to our work. The broader community-development industry has refined a vast amount of evidence-based best practices over the past 25 years in providing housing and services to more vulnerable populations. There is a roadmap on how to engage in this work. It has been proven to be effective. My job is to couple those learnings with expansion activities to educate non-housing providers around its efficacy and help them replicate versions of these models specific to our LGBTQ+ brothers and sisters.

I also believe in my heart that we are making great strides as a nation around increased cultural competency with the help of programs like SAGECare. My hope is that the groundwork we are laying now won’t be necessary for my niece and nephew’s generation because we will be at a place where differences like gender identity and sexual orientation will no longer be so divisive. We have a long way to go, but I am hopeful.

How does being based in Kansas City give you a unique perspective on affordable older LGBTQ+ housing?

I have been fortunate in splitting my time between Kansas City and SAGE’s New York City office, although I’ve always worked for organizations that required me to travel extensively all over the country. One aspect that I’ve seen reinforced here is that human beings, in this case LGBTQ+ individuals, are the same wherever you go. The fundamental needs we share far outweigh our geographic differences. Those basic needs include connection, community, a safe and welcoming environment to live in, and access to support services—when needed—to provide housing stability.

Housing discrimination is not specific to New York City or other major urban areas. In fact, I would offer that it is probably just as or more pervasive outside of the urban centers and coastal cities, and there are fewer services that are LGBTQ+-specific at their disposal. For example, it’s estimated that there are more than 22,000 LGBTQ+ individuals living in Kansas City. So the work SAGE and other organizations take on—such as cultural competency or LGBTQ+-friendly developments—in cities like New York City or San Francisco can provide fundamental lessons so we can better replicate similar interventions for our brothers and sisters in smaller communities in all areas of the country.