The Ruthie and Connie LGBTQ Elder Americans Act will decrease the isolation faced by vulnerable and disadvantaged LGBTQ older adults, improve their health, and increase their access to culturally competent services and supports through programs provided by the Older Americans Act.

“Many of our LGBTQ elders have faced discrimination throughout their lives. Now many are experiencing higher levels of poverty, increased isolation, and other significant challenges in their golden years,” said Congresswoman Suzanne Bonamici. “I’m pleased to lead the Ruthie and Connie LGBTQ Elder Americans Act with Representatives Deutch and Crist so our LGBTQ seniors can finally get the support and care they need. No one should have to worry about whether they will receive needed elder care support and services because of their identity or who they love.”

“No matter where you live, coming out should not threaten your access to long-term care or healthcare. Who you are and whom you love should never increase your risk for social isolation and poverty as you age. But that is the reality for too many LGBTQ seniors in America today,” said Rep. Deutch. “We need the Ruthie and Connie LGBTQ Elder Americans Act because the fight for equality continues today, and it continues right here in Congress. We need to make sure that LGBTQ seniors are able to access the services and support they deserve, and that starts here, with this bill.”

“Too many LGBTQ elders forced to fight their entire lives for their rights are now facing challenges aging as their authentic selves,” said Rep. Charlie Crist. “We know that LGBTQ Americans have higher rates of isolation, poverty, and poor health outcomes as they age. I am proud to be a part of this effort paying homage to trailblazing Floridians Ruthie Berman and the late Connie Kurtz to support our LGBTQ seniors.”

A one-page summary of the Ruthie and Connie LGBTQ Elder Americans Act can be found here. It is named for Ruthie Berman and Connie Kurtz, long-time advocates for LGBTQ equality. Connie fought for the rights of LGBTQ older adults until her death in 2018. Ruthie, her widow, continues to serve as a champion for the cause.

“As we celebrate Pride and the long history of LGBTQ+ elders leading the movement for equality, we are thrilled to see the reintroduction of the Ruthie and Connie LGBTQ+ Elder Americans Act,” said Aaron Tax, SAGE’s Managing Director of Government Affairs & Policy Advocacy. “It’s been more than 50 years since Stonewall, and it’s high time for LGBTQ+ trailblazers like Ruthie to have legislation like this that enables them to access the same aging services and supports as their straight and cisgender counterparts. We commend the leadership of Congresswoman Bonamici and thank each of the electeds who are taking a stand to better protect older LGBTQ+ people across the country.”

“The Older Americans Act is intended to provide services and supports to all aging Americans, but outdated laws continue to place barriers to access and lack of protection for millions of LGBTQ individuals,” said Nicole Jorwic, Chief of Advocacy and Campaigns, Caring Across Generations. “This bill would help to ensure that aging LGBTQ individuals and families have full access to the services and protections they deserve. The lack of explicit nondiscrimination protections undermines the goal of programs, and it is vital that aging people in this country can access long-term support services such as Home and Community-Based Supports. We commend Rep. Bonamici for advancing equity in health services for all aging Americans.”

Bonamici led the most recent update to the Older Americans Act, which was signed into law in March 2020. As Chair of the Civil Rights and Human Services Subcommittee, Bonamici has also been a leader in efforts to pass legislation to protect the LGBTQ community against discrimination in housing, access to credit, and other services. She is also a Vice Chair of the Congressional LGBTQ+ Equality Caucus.

Click here to see the original Press Release published by the office of Representative Suzanne Bonamici. 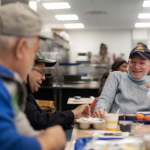